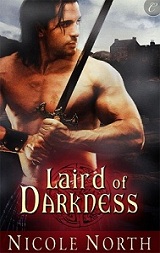 The hero of my paranormal romance novella, Laird of Darkness, from Carina Press is half-Fae. I have to say he was one of the most interesting and entertaining heroes I’ve created. I enjoy writing paranormal heroes, such as shape-shifters of various types, werewolves, or vampires. But Duncan allowed me to do something different.
1.      Creativity – I haven’t read very many Fae or fairy romance novels so I was able to create the half-Fae hero just the way I wanted without worrying about fitting him into a certain mold. There haven’t been thousands of romance stories written about them yet. I could write the unusual worldbuilding just the way I chose.
2.      Sexiness – the Fae in my story world are highly-attractive people with exotic looks. Duncan is dark, surly, brooding and sexy. I love it when a spunky heroine gets beneath the skin of a hero like that. She’s like a burr in his kilt, yet he can’t resist her.
3.      Unusual paranormal powers – Duncan’s abilities are based on an ancient Scottish legend. He is able to disappear except for a glowing red spot, and once this happens, he can fly through the air like a spirit. He can move quickly, and has exceptional strength. He can fling men through the air like rag dolls, and he terrifies horses simply because he’s a paranormal entity they sense. Because of this, he can dominate during a battle or attack.
4.      He goes naked half the time – When Duncan disappears, his clothing falls to the ground. When he reappears, naturally he is naked. Much to the heroine’s chagrin… and delight.
5.      Interesting dark backstory - Duncan has a tormented past. If he falls asleep at night, monster-like creatures from Otherworld physically attack him by scratching and biting. His nightmares come to life.
Half-Fae Laird Duncan MacDougall is cursed. His nights are haunted by Otherworld creatures sent to kill him. The only way to stop them is to possess the magic bow currently in the hands of his enemy half brother, Kinnon MacClaren. In desperation, Duncan plans to take MacClaren's bride-to-be hostage and exchange her for the bow.
Lady Alana Forbes has never met her intended, but she hopes he is handsome—and a good lover, for Alana is no innocent virgin. On her way to Castle Claren, Alana and her escorts are intercepted, and she is kidnapped by a man with extraordinary abilities—and every attribute she longs for in a mate.
Duncan didn't expect the woman he thought of as a mere pawn to be so beautiful, and so arousing. Alana is drawn to him as well—but Duncan still needs the bow, and Alana is betrothed to another. How far will Alana go to save the life of the man she's come to love?