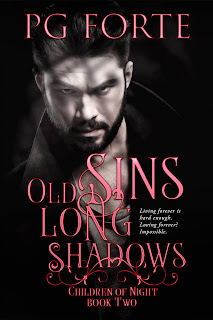 Of all the mistakes Conrad Quintano has made, driving Damian away is the one that haunts him the most. He hates the fact that he's hurt the man he loves more than anything. For the sake of the twins, though, Conrad and Damian parent as a united front, a challenge that grows more and more difficult with each passing year. And with Conrad in his weakened state after his kidnapping, it grows more difficult than ever to be around the one man he can't have.

But an old enemy's mission to create a dangerous new breed of vampire threatens the twins' lives, and it's now more important than ever that the estranged lovers put the past behind them, or everything they hold dear might be ripped apart.

Here's a Halloween Party excerpt from Old Sins, Long Shadows. I  love the idea of vampires throwing a costume party on Halloween--so much that I put one in the first Children of Night book (In the Dark) as well.

In fact, now that I think about it, Going Back to Find You features vampires with plans to crash a Halloween party as well. And, who knows? I haven't wrapped the series up yet, there may be more.

EXCERPT:
As the guest of honor and the son of the house it seemed everyone present was eager to make [Marc's] acquaintance or get to know him better. He was not averse to either. Especially not while faint traces of the unusual power he’d tasted the previous evening still lingered in his system. He was hungry for more and anxious to meet anyone who might help him touch it again—like the woman approaching him now, for example.
She seemed a likely prospect. Tall and fair, strikingly good-looking, she carried an aura of power that was palpable even from halfway across the room. The crush of people seemed to part before her purely on instinct, opening a path that led her directly to the dais. Directly to Marc.
He smiled in greeting. “Good evening. Welcome to my party.”
“Your party?” One elegant brow arced higher, two perfectly painted lips pursed into a petulant little moue. “Is it really? Well now, that is a surprise. Is Conrad no longer in residence?”
“Oh, no, he’s here.” Marc scanned the room without finding him. “Although I’m not sure where he’s gone to, at the moment. I only meant that I’m the one he’s throwing the party for. Me and my sister, that is. I’m Marc, by the way.” He held out his hand.
Lavender-blue eyes studied him curiously. “Georgia,” the woman replied, giving him her hand after a brief pause. “So, tell me, Marc, what is it you and your sister have done to merit being honored with so elaborate a fête? And on Halloween, of all days. I really can’t imagine what’s come over Conrad, all of a sudden. Why, I recall when the mere suggestion of such a thing would have been enough to enrage him.”
“Really?” Marc grinned. “We didn’t do anything special. I think it was Damian’s idea. It’s just that today’s our birthday, you see.”
“Your…birthday?” Georgia stared at him, lips curling into an expression of faint distaste. “Oh, surely not? You can’t mean to tell me someone had the incredibly bad taste to turn you actually on Halloween? Who was it? Not Conrad, I know. I can hardly believe even Damian would be capable of anything so tacky.”
“Tacky?” Marc looked at her in surprise.
“Well, clichéd, then. At the very least. I mean to say, vampires? Halloween?”
Marc shrugged. “I guess I never thought of it that way before. But, that’s still not what I meant. Today’s our actual birthday—the day we were born.”
“Your actual birthday,” Georgia repeated, the look of distaste growing stronger. “I see. Well, that does make a difference, doesn’t it? And you’ve chosen to celebrate that, have you? My, how very…very…quaint.”
And for more great books that you might have missed the first time around, check out author Allie Ritch's Reunion post, highlighting books from three publishers that, sadly, are no more. Liquid Silver Books, Loose Id, and Samhain. https://allieritch.wordpress.com/2021/10/27/book-reunion/