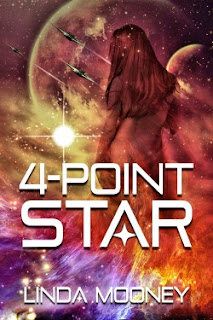 Being called to become part of a Gaspiel is an honor, a chance to serve in the war against the Fol’Minites and to protect the K’Stollians’ world. Four men are required to form the four-point star, each one controlling a different element of their warship—navigation, weapons, engine, and the captain. But the most important element and hardest to find is their fifth, their Visl—their strength.

When Ensign Sienna Pratt finds out she is called to be a Gaspiel, she sees it as an opportunity to learn about a system no one knows anything about, and she agrees. She knows the K’Stollian ships are different. They don’t run on fuel, have no material for weapons, they are completely bio-dispensing organisms. Basically, the ships convert the endorphins released during sex into power to run their systems, and that’s where Sienna would come into play. Not knowing exactly what she’s signing up for, she’s willing to take the risk to help the people and the planet. But when it comes time to fulfill her obligations, can she give herself over?

The crew quickly learns that Sienna is not your average Visl, and she will not take things lying down. She is not merely there to service the men, she's determined to prove her worth. The war has been raging for centuries, but now it’s a battle for the K’Stollians’ existence. Someone is sabotaging them and wants to wipe out their entire species, but who? The Gaspiel know there is strength in numbers, but whom can they trust?

To make matters worse, rule number one is not to let your emotions become involved, but when it comes to the four males who've claimed her body, that quickly proves impossible.