Bring It Back(list) Scent of the Roses by PG Forte

The following excerpt is important to me because this was the scene that made me realize what the theme of the Oberon series was. Family. I was writing about family. Nick has one, Scout wants one, together they make one.

You might think the theme is food. But it's not... 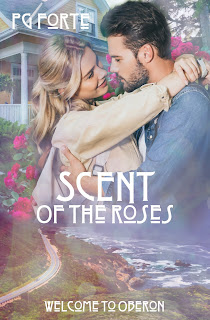 Scent of the Roses
Oberon, Book One
by PG Forte
Paranormal Romance/Romantic Suspense

This title is currently out of print, BUT I'm in the process of re-booting the entire series. Join my FB group for updates:

For years, Scout Patterson has tried to run from the mistakes in her past. Now, she's coming home--to face the ghosts she's never laid to rest, and the love she thought she'd lost forever. Reawakening that love would be a dream come true. Unfortunately, love is not the only emotion that can last forever. ​

Memories and dreams are the only things that have gotten Nick Greco through the past twenty years. Memories of the girl he loved and lost, and dreams of what his life would be like, if he could only find her again. And if he can bring himself to believe that anything she tells him is true.

Can the star-crossed lovers put aside the hurt and distrust they still harbor toward each other? Or will the evil which already nearly destroyed them once, triumph yet again?

The smell of sautéed onions, of garlic and basil and green peppers and other fragrances she couldn’t identify brought Scout back to the present. On the stove, steam rose from a large pot of water. The contents of two saucepans sizzled. Nick stood at the counter next to the stove, chopping basil.

“Hey.” He smiled at her over his shoulder. “We’re almost there, don’t fall asleep yet, okay?”

Scout nodded weakly, but then decided conversation might be the only way to focus her attention. “You really look like you know what you’re doing over there. I’m impressed. I didn’t know you could cook.”

Nick flashed an amused grin at her. “Well, of course I can cook.”

“That’s not the point, is it? You’re not Italian.” He sprinkled the basil into one of the pans and then stirred, with a graceful twisting motion of his wrist.

“Oh.” Scout thought about that. “You mean, it’s like a cultural thing?”

“Genetic? So, you’re saying anyone with Italian blood in their veins can cook?”

“Pretty much.” He bent to open the oven door and removed a fragrant, crusty loaf of bread, which he quickly deposited into a cloth-covered basket. Then he slid the basket across the table towards Scout, along with a small bowl of warm olive oil to which a clove of garlic, crushed red pepper, and several sprigs of fresh rosemary had been added. “At least, we all think we can. Here, why don’t you start with that.”

“You don’t mean that you all cook well, though, do you?” Scout broke the bread apart, and dipped a piece into the fragrant oil. The taste revived more than her energy, she felt her heart warming within her. She’d had no idea she was so cold.

Nick had gone back to chopping––sun-dried tomatoes, this time––which he added to the mixture cooking in the other pan. “Absolutely. You can’t really call it cooking if it’s something no one wants to eat, right? The real secret, however, is that each of us, in our heart of hearts, believes not just that we cook well, but that we cook better than just about anyone else. At least certain, special dishes, we do. I think that’s why Italians tend to eat at home so much. Why pay for someone else’s mediocrity?”

“Of course. Case in point. She makes a minestrone that even my mother can’t touch. But, you know, she’d pretty much have to be good with herbs and vegetables and stuff, anyway, being married to Dan. If you want to taste something really special, get her to fix you some of her homemade, tri-color gnocchi with pesto sometime.” He flicked the heat off under both pans and tilted the contents of the pot into a strainer in the sink. Steam rose to envelope him.

That’ll be the day, Scout thought as she shook her head. “I don’t know, Nick. I can’t really see Lucy jumping at the opportunity to fix me dinner. Unless maybe it was for a going away party.”

“Oh, I don’t know about that,” Nick said, smiling to himself as he assembled everything onto two plates, which he then carried to the table. “One of these days, you know, she just might surprise you.”

He set the food down with a flourish, and slid into the chair across from her. The plate in front of Scout had been piled high with multicolored pasta bows in a delicate basil cream sauce, tossed with a mixture of red and green peppers, onions, broccoli, yellow zucchini, sun-dried tomatoes, and cubes of grilled chicken. All topped with more basil and paper-thin slices of Parmesan cheese. “It smells wonderful.”

Nick watched with amusement as she inhaled the fragrances greedily. “Yeah, but it tastes even better. Mangia!”

“So,” she asked, between mouthfuls. “Is this one of those special dishes that you cook better than anyone else?”

“Nah,” he answered with a grin. “This is just what you get when you throw a lot of leftovers together. It’s nothing really, just a snack.”

Scout looked at him curiously. “So, what’s the deal with you and Lucy? I know you’re cousins, and all, but she seems awfully worried about you.”

“Well, we’re double first cousins, that might have something to do with it."

“Double first cousins? What does that mean?”

“My mother and her mother are sisters, and her father and my father were brothers. Plus, for a while, after my father died, I practically lived with her and her family.”

“You keep telling me that,” he observed, grinning wryly.

“And you don’t think you are?”

“I guess I am.” He shrugged. “Luckier than my daughter, anyway. What does she have in the way of family?”

Scout stared at him, surprised by the bitterness in his tone. “Oh, come on, I know something about families, too, you know. Especially ones that don’t work. I saw your daughter with her cousins. She knows she’s loved. She’s got you and she’s got her mother, and even if you aren’t living together, it’s still better than being abandoned.”

He nodded. “I know you’re right. And I know it’s gotta be better for her now then it was when Lauren and I were together; although, there are plenty of people who’d maybe tell you otherwise.” Nick’s voice was harsh. It pained her to hear it. “But still, it’s not what I wanted for Kate.”

“Ah, it was just a mistake, that’s all. As Lucy would probably be the first to tell you.” He shook his head, thoughtfully. “She says I make a lot of them.”