Tuesday, July 16-
"WHY I LOVE RED INK - the Vital Role of Editors" - Author Dani Harper explains why a good editor is a writer's very best friend.

Thursday, July 18 -
“Instead of Christmas, WHO WANTS HALLOWEEN IN JULY?” – According to author Maureen Bonatch, she could celebrate this spooky season all year long. And she has a treat for readers with an ebook for 99 cents for a limited time. 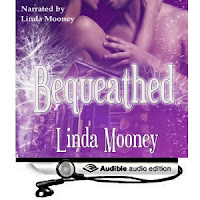 Narrated by Linda Mooney
Length: 2 hrs, 12 min
Hear a Sample
(Email Me if you want a free code!)


Homeless and destitute, Claire Stines has no choice but to move into the log house bequeathed to her out in the Minnesota wilderness. Although she has little else to sustain her other than a few dollars and even fewer seeds of hope, she believes she can make a fresh start for herself, and if she’s lucky, maybe find a little romance.

But first she has to overcome the rumors of the house’s supposedly dark past. More importantly, who is that young man she’s seen in the woods, and why has he been watching her from a distance ever since she arrived?

And why does he both fascinate and terrify her?