Halloween Costumes--who do you want to be?

Posted by: PG Forte
One of my favorite things about Halloween are the costumes. I love how each one tells a story.  Are you dressing up as who you are, or who you’d like to be? Or are you picking your costume for some other reason altogether?

I once knew a woman who worked for a government agency. She told me that, in order to keep up the pretense that they were just an ordinary company, all the agents would show up at work on Halloween wearing costumes. In my imagination they all dressed up as spies and secret agents in trench coats and masks. I’m guessing they really didn’t do that, but wouldn’t be great if they did?

For myself,  I tend to take a very minimalist approach to costuming—not that I dress up very often. The last time was for a circus-themed party at RT. I went as a Tattooed Lady because, well, I have tattoos. 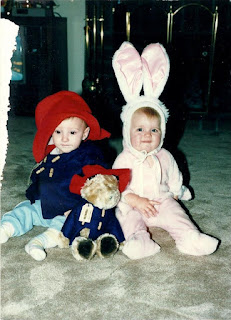 For my son’s first Halloween I took the clothes off the large, stuffed Paddington bear he’d been given and dressed him in them. As you can see from the picture, he wasn’t all that impressed with my costuming skills

For several years in a row my son would only dress as a pirate for Halloween.  He’d played Captain Hook in an afterschool production of Peter Pan and it stuck. My daughter, on the other hand, clearly inherited my less-is-more costume philosophy. When she was in third grade she went to her school party in her usual clothes. When questioned she’d explain she was dressed as a juvenile delinquent, then she’d pull out the fake cigarette she’d bought at a magic shop and pretend to light up. That didn’t really go over all that well.

That was the year I “dressed up” by accentuating the dark circles under my eyes. When  anyone would ask what I was I’d tell them: “Tired.”  A few years later, I accompanied my kids to a party dressed as a coat rack, because that was obviously what both of them thought I was anyway given the way they expected me to hang on to all their belongings for them. But I digress.

No conversation about brilliant Halloween costumes is complete without mention of the first Halloween episode of Buffy the Vampire Slayer—the one where everyone became whatever they were dressed as. “Outside to inside,” as Drusilla put it. It was a brilliantly written episode. In fact, now that I think of it, I’m sure this episode was a big reason why I’ve written several Halloween costume parties into my own vampire series.

My characters are often less than thrilled with the idea (much like my son and his Paddington costume, I guess). This is what Jason (the hero of  Going Back To Find You) had to say on the subject: 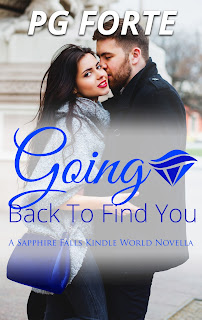 Everywhere Jason looked, he saw reminders of the holiday. From the artificial jack-o’-lanterns grinning at him from every lamppost, to the amiable scarecrows and sheaves of corn that lined the sidewalks. There were gauzy ghosts hanging from the branches of trees in the park, comical “gravestones” in front of the haunted house. It was all so charming and picturesque and playful--and depressing as hell.

Jason knew there were vampires who enjoyed Halloween, who took a perverse pleasure in dressing the part. Occasionally, they’d tried to convince him to join them in crashing one of San Francisco’s infamous Halloween parades. But the idea of pretending his very existence was imaginary left Jason feeling like the punch line of a really bad joke. Like being a turkey at Thanksgiving, an elf around Christmas time, or a small, winged god on Valentine’s Day. Not that he’d ever personally met any small, winged gods, but it stood to reason.

Despite my characters’ reluctance, I’ll probably keep on subjecting them to embarrassing costumes After all, my kids are too old for me to dress, and I enjoy it. As Spike observed, it’s just...neat.

So what about you? Do you like costumes, hate them, or don’t care either way? Do you have a go-to or fall-back costume that you reprise every year (like my son’s pirates, or Willow’s ghost)?

To read more about my books, check out my website at, www.PGForte.com

Email ThisBlogThis!Share to TwitterShare to FacebookShare to Pinterest
Labels: Children of Night series, Costumes, Going Back to Find You, Halloween, PG Forte, vampires