Bring It Back(list): Excerpt from Visions Before Midnight 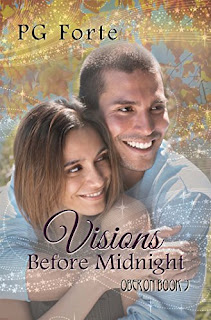 I've written several books now that are set either primarily or partially at Halloween, but Visions Before Midnight was the first. Glancing over it now, for the first time in awhile, I'm overwhelmed by all the various sources of inspiration I can pick out--from my daughter's third grade teacher who took her class on a field trip to the Oakland Museum of California to see an exhibit about Dia de los Muertos; to all the people I met while working both in a Native American arts and craft store, and as a docent in two California nature centers; or even my own time in high school.

I guess that shouldn't really surprise me as much as it does, given that the hero and heroine are both involved with education. But it still does.


Chay wasn’t looking for love everlasting tonight.  He was simply looking to get laid.

Visions Before Midnight can be purchased on its own at Amazon or Barnes & Noble or as part of the Happily Ever After in Oberon boxed set. 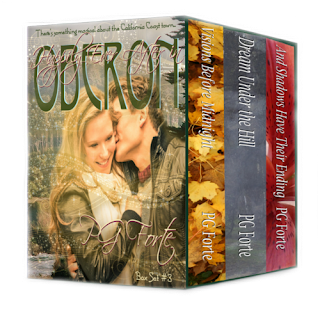 Happily Ever After in Oberon: Boxed Set #3

Mystical forces are once again at work in Oberon, the quirky small town set amid the beaches, wineries and forests of California’s Central Coast. Evil has come home to roost, an evil that threatens everyone’s happy endings and that brings with it a darkness that only love can dispel.

The exciting Oberon series concludes in Happily Ever After in Oberon, a collection that contains books seven through nine. Once again these are full-length novels in whose pages you will re-visit many of the characters you’ve previously met. Unlike the first two collections, however, a familiarity with those earlier books is recommended.

When the veil between the worlds is at its thinnest, something wicked haunts the hills around Oberon.

Chay Johnson is a traditional man; and the educator, flute maker, apprentice shaman has a lot of traditions to uphold, especially when it comes to choosing a life mate. Erin Allridge is a modern woman, with modern ideas about relationships and a painful personal history she has no intention of repeating.

When terror and tragedy strike the small town of Oberon, Chay and Erin find themselves faced with painful choices. If they can’t put aside their personal differences and re-think their visions for the future, they could lose everything they hold dear.

Book Eight: Dream Under the Hill

The Spring Equinox falls in the month that nearly all Native Traditions recognize as being one of Big Winds—big changes. And big changes have certainly come to Oberon this spring, along with an ancient evil that must finally be laid to rest.

Cara Matthews is a girl with a troubled past and a very troubling present. The teenage girlfriend of Oberon's newest guru has always looked for love in all the worst places and it just doesn't get much worse than the Church of Truth, Light and Vision.

Former cop Liam McKnight could have told her that, but having finally infiltrated the cult in hopes of discovering some clue to the whereabouts of his missing family members, Liam’s not about to jeopardize his mission for anything—not even love.

In a month marked by birth, death and marriage, the inhabitants of Oberon must all come to terms with what's really important to each of them—important enough to die for. Only one thing is certain; when the winds of change finally stop blowing nothing, and no one, will be the same.

Book Nine: And Shadows Have Their Ending

The last two years have not been kind to Seth Cavanaugh. But Oberon’s former “golden boy” has suffered and grown and finally feels ready to put his troubled past behind him. So, doesn't it just figure that the girl who caused all the trouble in the first place should pick now to return?

Deirdre Delaney Shelton-Cooper has spent the past two years trying to forget the events that marked her first visit to Oberon, but can you ever really forget the memory of your first love, no matter how painful those memories are? It's just her luck the boy she put herself through hell for has turned out to be such a loser.

After a disastrous reunion, they'd both be content to have nothing more to do with each other. But when a murderer targets Deirdre, Seth’s the only one she can turn to for help. Now the pair must determine how much they’re willing to risk for a love they’d all but given up on.