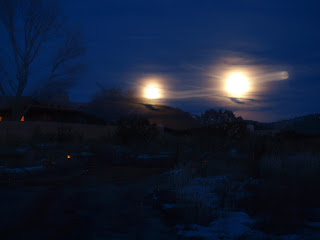 Two full moons rising? I thought this photo was appropriate for Here Be Magic. I was photographing the rising full moon with a long exposure and accidentally jarred the camera. Couldn't have done it on purpose!

I'd love to write a story - or series of stories - about a world with multiple moons or suns, but I worry I'd go down a serious rabbit hole of figuring out the physics of such a thing. I always joke that I write fantasy in part because I can Make Shit Up. (MSU - a tool for every writer's toolbox!) I know this is a huge part of the fun for some science fiction writers, calculating how the scientific principles would function in an alien environment, and I can see the appeal of that. But I'm also enough of a perfectionist that it would drive me crazy to get something really wrong.

On the SFWA forums we've been discussing the announcement regarding a potential new planet discovered in our solar system. This would either bring us back up to ten planets or restore us to nine, depending on where you stand on Pluto's status. (Plenty of people are annoyed that this only-mathematically-detectable planet is being given that honorific when Pluto's was stripped away.) At any rate, several of the science fiction writers brought up that this is why they write stories set in completely fictionalized solar systems. Imagine having an entire series set in our solar system and repeatedly referring to the wrong number of planets!

Of course, plenty of books and movies become dated that way. I laugh every time at movies like My Best Friend's Wedding when Julia Roberts hauls out that shoe box-sized cell phone. Or, less amusing, when the World Trade Center twin towers appear in the background. Some of that is inevitable and the best of these become iconic of the time. Jane Austen's books continue to be classic partly because they give such an interesting glimpse of the constraints of that era.

So I have sympathy with the science fiction writers gnashing their teeth over Planet Nine (or Ten). And I think I'll continue with my MSU method as long as possible.

Speaking of SFWA, however - did you know there's a New Release Newsletter? It comes out every two months and lists new releases from SFWA members. Anyone can sign up here!