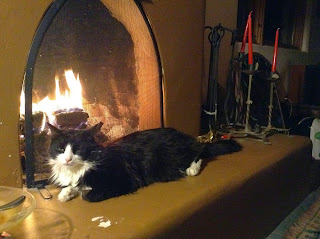 Winter is an excellent time to discover the joys of curling up by the fire with a delicious book - either one we're reading or one we're writing.

Jackson, of course, is above both activities, as he needs to devote time to thinking Deep Thoughts.

Because of all this, I belong to both RWA (Romance Writers of America) and SFWA (Science Fiction and Fantasy Writers of America). I've been in RWA much longer, largely because I could join as a newbie, where SFWA requires stiffer publication credentials. So, I'm still learning my way around the SFWA community. While most everyone has been wonderful and welcoming, I am sometimes aware of the scarlet R on my chest. Nobody has openly scoffed or insulted my Fantasy books, but people have kindly said that they don't read books like that or that they don't read romance. With one male fantasy writer I've long admired and read, I screwed up my courage to show him a copy of The Mark of the Tala, telling him it's up for Book of the Year with RT Magazine. He didn't even read the back cover copy - admittedly, this was at an RWA event, so my scarlet R was blazing bright - and he handed it to his wife, saying that it might be the kind of book she'd like.

Yeah, okay - that made me want to kick him.

Still, I know that I can't go around kicking everyone who so blithely dismisses my books because of my scarlet R. I'm pretty sure that doesn't build relationships. I'm really okay with people reading my books and not liking them (I might sulk a little and weep into my whiskey, but I'm reasonably Zen about it), but it irks me to have my books dismissed out of hand. So, while I nursed the hope that The Mark of the Tala might be nominated for a Nebula Award, I wasn't all that surprised that it didn't make the final cut. After all, I'm pretty sure not many SFWA voting members read it.

(The Nebula Awards are different in that we can't enter our books for consideration. They have to be nominated by other members, and then receive enough nominations to make the top six. Unlike RWA's RITA awards, where we pay to enter our books and judges receive a stack to read and score.)

So, as my friend and I sat and drank wine, talking about our writing careers, she suggested to me that I'd have an easier time of it if I downplayed the romance in my fantasies. Or took it out altogether. Believe me, I know plenty of women SFF writers who've done this, in order to be taken more seriously. Oddly enough, I don't know any male writers who've felt they had to do this.

And I think she's right. I could do that. But I'm not going to. People who know me well will tell you I'm stubborn. They'll say it with both love and exasperation. More than once it's been suggested to me that I should be less stubborn. I'm stubborn about that, too. Being stubborn means sticking to what I believe is right, to how I want my books and my stories to be. I see absolutely no reason why I can't have romance in my fantasies. I think men could read my fantasies and not have their masculinity or SFF integrity reduced. I think a man can do better than glance at my book and hand it to his wife before the girl cooties rub off on him.

Thus, I wear my scarlet R openly on the SFWA forums. I refuse to apologize for it, or even downplay that aspect of my work. Yes, it's a more difficult path, but I feel anything less is admitting to some kind of shame or embarrassment - or that romance is somehow a lesser genre. I know some people think that. I don't.

When I explained all of this to my friend, she said, "You should write a blog post about this."

So I have, here at Here be Magic - where romance and SFF meet, blend and have a helluva party.