Let’s hear it for the boys

Posted by: PG Forte
My book The Oak King released this week. It’s a fantasy ménage set in nineteenth century Ireland between a very independent-minded—and very human--widow named Aine and the two tree spirits who have fallen in love with her. And with each other.

This book has been a long time in the planning and has been through more re-writes than any other book I’ve ever written. At one point, it was a novella. At another, I thought I was going to have to turn it into a trilogy—never mind the fact that the last book I tried to turn into a trilogy morphed into a series that I hope to be able to wrap up in seven books. Thanks to my wonderful editor and a couple of equally wonderful beta readers, I managed to wrangle the story into something more manageable.

I love Aine. She’s a woman who knows her mind and isn’t afraid to change it. She’s also not afraid to go out and get what she wants, even when it runs counter to everything she used to think she wanted. She’s also probably the only woman who could ever have handled not just Fionn and Kieran, but all the angsty, complicated baggage the two of them brought along with them.

I do love angsty, complicated heroes.  It’s a weakness. And, I have to confess, when it comes to Fionn and Kieran…I’d have a hard time choosing a favorite as well. They belong together, although they fight it for a good part of the story.  And they both belong with Aine. And when they finally all come together…well, I’m sure you can guess what happens then.

Anyway, here’s the blurb and a short excerpt, because sharing is caring--as I'm sure Aine would agree--and I love sharing excerpts. 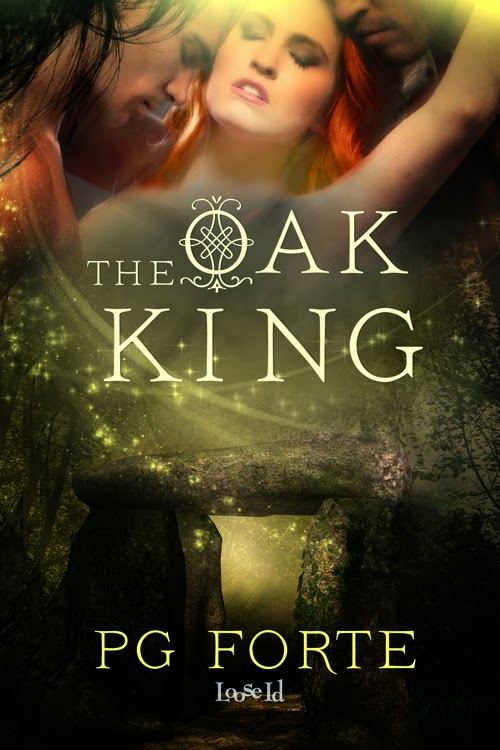 From midwinter to midsummer, Fionn O'Dair rules the Greenworld as the Oak King--a role he feels is beyond his abilities, and one that dooms him to a loveless future, forever craving the one man he can never allow himself to have. How can he resist what Aine offers--the sweet devotion that soothes his aching soul, and the slim chance to live a "normal" life as her husband, if only for half a year?

Holly King Kieran Mac Cuilenn never desired a human lover--until now. Seeing Fionn and Aine together fills him with longing for the love he threw away and awakens feelings he thought he'd buried with the last Oak King. Is there enough magic in the solstice to correct the mistakes he made years ago? Or is he doomed to be forever left out in the cold?

December 1895
At the time of the winter solstice

From his vantage point, beside the farmyard gate, Kieran surveyed the seemingly peaceful scene spread out before him. The night was still with nary a breeze to stir in even the topmost branches of the nearby trees. High above his head, thin white clouds stretched misty ribbons across the sky, blotting out great swaths of stars and wrapping the half-dark moon in a gauzy embrace. Kieran studied the orb’s shadowed form for several moments, the better to divine her wishes. Fionn might claim to serve the sun alone, but Kieran, Ruler of the Waning Year and creature of the ’Tween, knew better. There was naught on this earth could escape the Night Queen’s influence.

In a little over a week, when the moon rose full, it would be for the thirteenth time this year. A rare and unusual occurrence, it signaled a time of transition and change, a time when one might reasonably hope to alter one’s path. A hot swell of anticipation arose within him as he thought of it, the moon of opportunity and rebirth. The opportunity to change—wasn’t that exactly what he needed, what they all needed?

Tonight. Why should it not be tonight?

The sentinels of the forest were used to biding their time. A delay of several decades before a goal could materialize or a dream come to fruition meant little to one such as he. That didn’t mean he didn’t suffer through the waiting, however. It didn’t mean he couldn’t yearn, or covet, or long for what he could not have, what he might never have, or what he might have foolishly thrown away.

Tonight. Please let it be tonight.

On the surface, the cozy farmhouse nestled in its tidy yard looked much as it had the previous year, snug, warm, and inviting, but as Kieran well knew, looks were oftentimes deceiving.

Last year, even despite the pleasant setting, the sight of this place had sparked only fear and uncertainty within him. Tonight, the small stone building, with its whitewashed walls and slate-tiled roof, with candles burning in the windows and a lazy curl of smoke eddying from the chimney, marked the seat of all his hopes and dreams, as well as the crux of his restless discontent. Within its four walls resided everything he longed for and ached to possess.

It was that which kept him standing out here in the cold, which made him hesitate, afraid to enter or even to make his presence known to those inside. Fear. Anticipation. Hope. Uncertainty. Excitement. Desire. Love. Regret.

Maybe he’d already had his chance and lost it. Maybe what he longed for now would never be his again. In truth, he didn’t know what to expect. That, at least, was the same as last year.

He’d sped here last winter on the full moon’s bright wings and his own breathless terror, his whole mind focused on a single goal—that of saving Fionn’s life. When he’d arrived at the farmhouse, it was just in time to hear Aine’s threat to cut down his grove—and out of nothing more than spite! It had seemed to Kieran then that his fears had all been justified.

Now, he could laugh about it. A smile creased his face as he remembered it. How fierce and fiery she’d appeared. Despite the danger she’d represented, she’d been radiant with her red-gold hair catching the fire’s light and her blue eyes gleaming like sapphires over her flushed cheeks. Even smudged with flour and seething with rage, she’d been a sight to render him almost speechless.

She’d seemed even more magnificent in her anger and wounded pride than she had on that previous midsummer morning. She’d looked like a goddess or a proud young queen as she’d stared Fionn down. Her hands had been fisted on her hips. Her chest had heaved with every angry breath. But queens and goddesses are ofttimes cruel, as Kieran was well aware. And, in that moment, nothing about the situation had struck him as even remotely humorous.