Posted by: Jenn Burke
This is my first post on Here Be Magic. Thanks for having me! Earlier this year, Marie Harte wrote about 2015 being the Year of the Sheep. For me, it’s the year of the book. Tomorrow, my debut novel will be released by Entangled Publishing (a paranormal romance called HER SEXY SENTINEL—more on that in a little bit) and three books of my five-book male/male science-fiction romance series (co-written with Kelly Jensen) will be published by Carina Press before the end of 2015, starting with CHAOS STATION in March. I’m tired just thinking about it! (But also beyond thrilled.)

One of the things I like best about writing speculative fiction is the world-building. I can let my imagination run wild, coming up with fantastical creatures, landscapes, history, culture, magic. But in order to make sure readers can immerse themselves in the story, everything in a world needs a reason for existing and rules that govern it.

Rules are so important in speculative fiction. They keep the magic (or science) in a world consistent and, if they’re done well, present limits. Whether those limits are hard or soft is up to the writer, but they’re needed to prevent magic from becoming the easy answer to every conflict. If a character can get rid of a problem with a simple wave of a wand—without repercussion or limits—then you’ve got a problem. The story will lose all tension because there’s no longer any question if the characters will be able to get out of the predicaments they find themselves in.

When I created the magic system for HER SEXY SENTINEL, I made sure to keep this in mind. In that world (which is mostly like the real world except for, you know, demons and portals and magic), there are three tiers of magic-users. The first are psychics, who unconsciously tap into the energy they generate to enhance their senses. The second tier is magic-users, psychics who manage to access energy beyond what they generate themselves, either in a moment of crisis or through intensive study. On the third tier are the marked magic-users, the people who have the potential to be much more powerful than anyone else. From that tier come the Sentinels, two special magic-users who protect Ottawa. One of the Sentinels, the Magus, is the living nexus of all the magic in the city. Because portals. And demons.

At each level, there are limits. It takes a lot of adrenaline or effort for a psychic to break through to the next tier and become a magic-user, so it doesn’t happen often. A magic-user can’t wield too much magic at a time, or they risk burning themselves out. Even at the top of the magical foodchain, the Magus risks losing her mind if she releases too much magic from the nexus.

Because I had these rules in place, the conflict through the book isn’t easily addressed. Magic doesn’t become a deus ex machina but a tool with limits and repercussions for its use. Which leads to…

Well, you’ll just have to read it.

HER SEXY SENTINEL is available January 26! 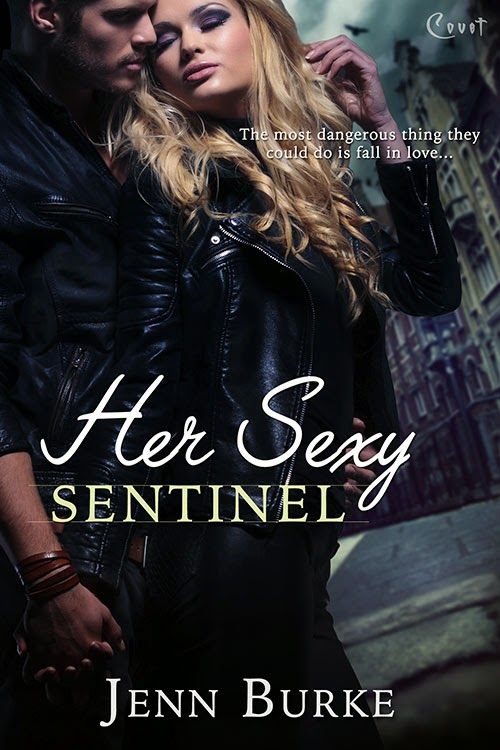 The most dangerous thing they could do is fall in love…

Callie Noble fled to Ottawa to escape danger. But she is far from safe. Overwhelmed by a strange new power she can’t control, Callie is terrified and painfully incapacitated. Her only hope is to seek the help of the one man who broke her heart…

Derrick Llewellyn is one of the Sentinels charged with the protection of the city’s mysterious secret. Seeing Callie again is a shock enough, but the electricity between them is stronger than ever. Still, loving another marked individual is forbidden, and Callie needs his help—not romantic complications.

But there are forces at work in the city, and Callie finds herself inexorably drawn into a world filled with danger and untold magics. A world where loving Derrick isn’t just forbidden…it’s the surest way to drive them both mad.