Posted by: Loribelle Hunt
In August 2013 I blogged here about Turning Points. I thought at the time the changes in my life would be centered on writing. Little did I know. My mother died suddenly in October 2013 and my dad moved in with us a couple months later. The beginning of 2014 was not an improvement. My dad, who'd been in remission, spent several weeks in the hospital and my oldest daughter began what has been a series of illness and recover that so far is still unexplained/diagnosed. So it likely will come as no surprise my deadlines got a little flexible. (Thank God for understanding editors and publishers!) But finally that book I sold back in August 2013 is finished and edited and has a firm release date.

I started the first draft of The Southern Belle's Guide to Witchcraft in 2006 for my mother. She was a big fan of paranormal YA and Southern comedies and a fun gothic series (Dark Shadows anyone?). I'm not really sure what I intended the book to be other than something that would entertain my mother lol. There's a great deal of her influence in it. To say I'm nervous about its release is the understatement of my life.

And that's quite enough anxious introduction, isn't it? So here it is. 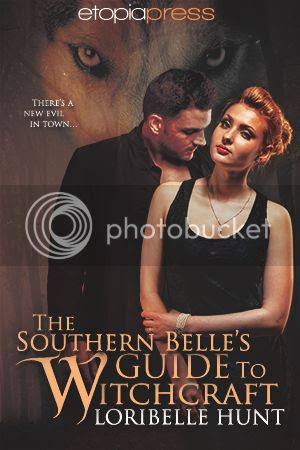 The Southern Belle's Guide to Witchcraft

There’s a new evil in town, and it’s gunning for Scarlet...

Scarlet Burke isn’t an ordinary witch. She comes from a long line of Burke witches, whose job it is to protect the good folks of Purgatory, Alabama from things that go bump in the night—and things that might slip through the portal in Fool’s Wood. Normally, it’s an easy gig that doesn’t take much time from her day job. Until her ex-husband turns up dead in a ritualistic killing no one recognizes. William, a mundane, had high-tailed it out of town years ago after getting Scarlet’s baby sister pregnant. So why had he come back? Better yet, who (besides Scarlet) had wanted him dead badly enough to lure him to the forest, stake him, skin him, and drain his blood? It wasn’t a vampire kill, but she was damned if she could determine what it was.

Werewolf Jake Mills, the bossy and possessive chief of police, can’t believe anyone in his town could commit such a brutal crime. And Scarlet can’t believe she’s still trying to avoid his advances. Jake has been chasing her for years, and if he wasn’t so charming—and so drop dead sexy—she might try harder to outrun him. Or at least summon a bit of self-control. But the man just refuses to stay in the “Just Friends” box she’s placed him in.

But when the killer targets Scarlet’s family, ghouls, demons, and dark fae all come under suspicion. And when her daughters become the targets of an ancient dark ritual, Scarlet and Jake are forced to make an impossible choice. Fight evil with evil, or watch Scarlet’s daughters die...