Healer Week and One Thousand Kisses

Posted by: Jody W. and Meankitty
Over the next week at HERE BE MAGIC, we're going to be talking about healers. Magical healers, technologically advanced healers, contemporary healers -- those who diagnose and treat our ailments and bind our wounds have a special place in many human cultures, be those cultures imaginary or real. From medicine men to surgeons to AIs with a medical bent, healers have also played many significant roles in the fiction we write at HERE BE MAGIC. We'll be hearing about healer characters from Angela Highland, Shawna Reppert, Nicole Luiken, and Annie Nicholas, among others -- and anyone is welcome to chime in in the comments.

We'll also be hearing about a healer character I wrote. Anisette, the heroine of One Thousand Kisses, a 2011 release (http://jodywallace.com/books/one-thousand-kisses/), is a fairy princess whose magical skills are honed in the area of medicine. One approach might have been, in a realm where most of the characters can use magic, to make everyone able to heal--devaluing the skill that my readers would be used to valuing. What kind of society would develop when everyone was able to heal him or herself? 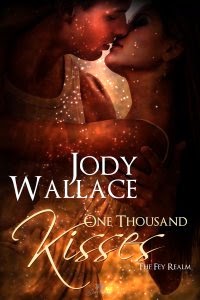 While that's potentially interesting (maybe some day!), I chose the more common route of having in-depth healing skills be rare and prized. As an unusually powerful fairy, Anisette's skills in healing could assure her a comfortable lifestyle and fulfilling work. However, she found herself torn between the path she'd been raised to follow in the fairy government and her preference for healing, medical research, and...avoiding politics. Yep, I started Anisette as the stereotypical kind, pacifist, sweet-natured archetypal female healer character so prevalent in SF/F and SF/F romances.

Not a virgin, though. I didn't go that far!

Either way, she didn't get to stay in her comfortable stereotype. I paired her with a hero, Embor, who had a very involved role in fairy politics. The co-president, in fact. Embor, who never liked to admit that he was in need of a healer's touch, knew Anisette was likely his "bondmate" -- the fairy with whom one's magical power increases instead of decreases should one choose to have children -- but didn't know how to tell her. Especially considering Anisette didn't like him much.

A fey cat proceeded to nudge them into a desperate adventure to save both their lives and the fairy realm itself, but most of their journey took place in the human world, where Anisette's healing powers wouldn't work and Embor wasn't president.

What if your best talent, the ability for which you felt you were most useful, was suddenly taken away from you? How would you function? How could you save the day? Anisette had to delve into her true potential after her magic faded and her life seemed destined to end up anywhere but where she'd always thought it would.

Would she end up a healer? A politician? Or something else entirely?

Check back all through the week to read about the great variety of healers and approaches to medicine we'll be featuring on the blog. Make sure you show up Wednesday for a chance to win several of the books we'll be discussing!