Book series: How do you know when to stop?

Posted by: Angela Campbell
With the third book in my series releasing soon, I’ve been thinking a lot about connected stories, or more precisely, when to end them. I’m not just a fan of books. I love movies, too. There are a lot of movies I love that went on to have sequels (or prequels) that were so bad, they almost ruined the first movie for me. Star Wars. Superman. Batman (90s). The Matrix. Pirates of the Caribbean. So. Many. Movies. So many that should have quit while they were ahead already.

The last thing I want to do as a writer is make the same mistake and drag out an overarching story or cast of characters when they’re overdue for retirement. Writers, by nature, are a self-doubting bunch, though, and we second-guess ourselves all the time. Seriously, we all need therapy for this trait. But also seriously, how are we supposed to know when our instincts are leading us astray?

I feel like I’ve only scratched the surface with the world-building in my series about psychic detectives, and I’m itching to continue it. Soooo, I’ve decided to trust myself and do just that. Because truthfully, I only ever planned to write one book, On the Scent, and be done with it. A straightforward mystery about a man, who discovers he's psychic after a mishap early in the book, protecting a woman and her two pets. Then I created psychic medium Alexandra King about two-thirds of the way into it, and I just knew she deserved her own book. Thus, Something Wicked was born. 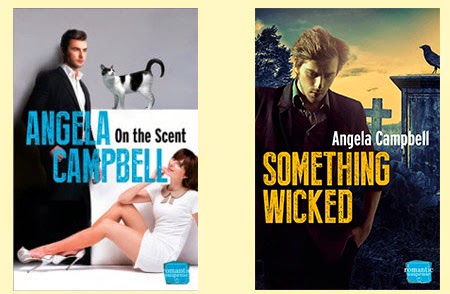 The third book, same thing. A minor character named Spider started tapping me on the shoulder, demanding attention, bouncing on her heels and pointing at herself before I was even finished with Alexandra’s story. So I gave Emma "Spider" Fisher her own story, and it so far is my favorite of the series. I’m awaiting a cover and approved title, but oh, how I wish I could share them with you today. Soon, though. Spider’s book is scheduled for release June 5. Not much longer.

Funny thing is, the same thing happened again. I certainly never expected to write more than three books in this series, but wouldn’t you know it, Connor, another character who happened completely by chance, morphed into a force to be reckoned with, and it’s his story I’m working on now. And you know what? I’m trusting whatever instinct is leading me here and hoping I’m not pushing out another Superman III or IV. I kind of don’t think I am since I’m really enjoying myself with this series, and reader feedback has been really positive...so far. If I ever reach a point where the ideas have dried up and the characters aren’t lining up behind me, clearing their throats and begging for attention, I’ll stop it, cold turkey.

But did I mention Spider’s story releases June 5? I can’t share a cover or title yet, but I can share the unofficial blurb.


Socially awkward Emma “Spider” Fisher prefers her laptop to people, so she’s more than happy to oblige her boss when he asks her to pet- and housesit while he honeymoons in London. It doesn’t take long for accident-prone Spider to lose a dog, get locked out of the house, and set off the house alarm. Thankfully, her hot new neighbor is more than happy to come to her rescue. But Noah West is a mystery to Spider—and one she intends to solve. Because either the man is seriously living in a haunted house, or he’s a serial killer. Either way, he’s a total hottie, so Spider will have to guard her heart while she and her animal sidekicks sniff out the truth. After all, she has secrets of her own, dangerous secrets...

***
Learn more about Angela Campbell and her books at www.angelacampbellonline.com.