Monday, March 4 -
"HERE BE NEWS" - All the latest from the gang at Here Be Magic, including a new release and a contest.

Saturday, March 9 -
This week's Bring It Back(list) feature is “QITIRIN”, a sensuous paranormal romance by Linda Mooney. Plus it’s on sale this month for 99¢. Scroll below for details. 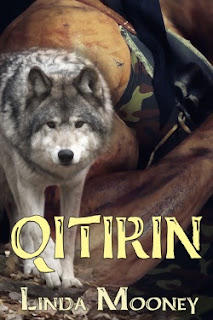 SALE: get the ebook for 99¢ during the month of March
(Available at this price only on Amazon and Linda's website)


Scarred and traumatized, ex-Marine Sergeant Joshua Cobb can no longer function amid normal civilization. He's retreated to the mountains of Alaska to live in solitude, where he can battle his personal demons in peace.

Life is harsh in the untamed wild, especially when he has to face other creatures who are also trying to survive. But the bears and wolves and other dangerous animals are no match for the two-legged variety who see Joshua as easy prey.

He has no idea that the injured wolf he rescues will become more than a companion. It will also save his life, and show him a love he only believed was possible in fairy tales.

Because the wolf, Qitirin, is more human than anyone could imagine.

The annual
LOVE IS
IN THE AIR
GIVEAWAY
from Night Owl Romance!
Runs March 7th to March 28th, 2019. Easy-peasy to enter, and you could discover some great new books along the way.
OVER 100 PRIZES:
1 Grand Prize: Kindle Fire HD 8 & Book Bundle (USA only)
25 – $10 Amazon Cards (open to the world)
75 – $5 Amazon Cards (open to the world)
Check it out at: https://www.nightowlreviews.com/v5/Blog/Articles/Love-Is-In-The-Air-2019-by-Night-Owl-Romance

WIN A SIGNED PAPERBACK
Dani Harper's been working on cleaning out her office since the beginning of the year - and was surprised to discover a box of Changeling Dream paperbacks!
Check out her latest post and enter to win a signed copy!
https://herebemagic.blogspot.com/2019/02/bring-it-backlist-changeling-dream-by.html