Posted by: Jenny Schwartz
Bound Magic, the second book in the Faerene Apocalypse series by Jenny Schwartz, is out today! It's available on Amazon exclusively as it is in Kindle Unlimited. 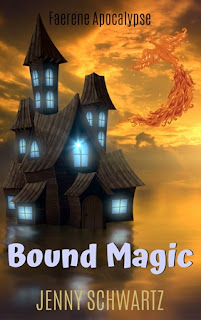 Six billion people are dead. More are dying. The Faerene Apocalypse isn’t over, but the seeds for a new beginning have to be planted, now.
The future of Earth is that of a planet of many sentients: of the invading, magical Faerene and mundane, traumatized humanity.
But a few, exceedingly rare humans do have magic. Amy Carlton is one of them. Forced to bond with the black griffin, Magistrate Istvan, and act as his familiar, she doesn’t understand the magic she possesses. Nor does she understand the Faerene society she is thrown into.
She’ll have to learn fast because the cost of Amy’s ignorance couldn’t be higher. Death stalks an apocalypse, and the lives lost could be those of people she loves.