Posted by: Jenny Schwartz
In 2019 I'm indulging in a new series. The Faerene Apocalypse blends apocalyptic fiction with fantasy. The first book, Stray Magic, is just out. Bound Magic will be out in late March (pre-order available, link: https://www.amazon.com/dp/B07N5WY96H/ ). Loyal Magic is out mid-year. Below is the blurb and an excerpt from Stray Magic. The series is available to read in Kindle Unlimited as well as to buy. Enjoy! 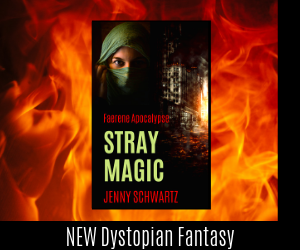 When magic crashes through the Rift, Earth devolves into an apocalyptic nightmare. Survival becomes the only game in town, and college girl, Amy Carlton, learns she’s a more ruthless player than she ever imagined.

Magistrate Istvan signed up for the Faerene Migration knowing that the price of Earth’s future would be paid for in hellfire and blood. But the black griffin hadn’t anticipated humans accessing magic.

Now, a new and impossible bond must be forged between a Faerene invader and a human familiar. But first Istvan and Amy must survive to form the bond.

Note: “Faerene” refers to the many peoples of another world: the griffins, dragons, unicorns, werewolves, elves and ogres who've crossed to Earth. No prepper or survivalist could have been prepared for their arrival. 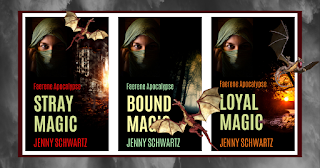 I grabbed my own phone from the pocket of my shorts and flicked through messages. Nothing from my parents, but my friends were peppering me with their exclamations of shock and amusement. I glanced toward the living room. I was partly responsible for the children in there innocently watching a movie. Instead of amusing myself with the sightings of fantastic beasts, I called up a reliable news feed. Ramona had opened my eyes. No matter what the perpetrators of this elaborate prank had intended, the consequences were what mattered.
Emma’s parents arrived first. An hour after they departed, the news was reporting a riot in Los Angeles. There was looting. In fact, judging by the determined, organized behavior of the looters, the looting was the point of the riot. A firebird observed everything from the roof of an office tower. Its glowing wings were a fiery point of light that matched cars set on fire on the street.
How were the pranksters covering the globe with their realistic creations?
There were vampires sighted dancing in Rio and turning into bats, a sphinx toured the pyramids of Giza, more ogres tramped through Japan, and a kraken flopped a long-tentacled limb onto the streets of Hong Kong.
More riots broke out, not just in America, and not all with looting as their intent. People demanded government action. Politicians demanded the pranksters reveal themselves and confess and, most of all, stop their criminal stupidity.
The night lived down to Ramona’s expectations. Parents arrived at all hours to collect their children, waking those who’d managed to fall asleep, baffled by why parents of other children were arriving in a flurry of panic and tears.
By midday the next day the camp was empty of children. All the other volunteers had fled, as well, returning to their homes in various cities.
I couldn’t comprehend their illogical behavior. I sat on the porch steps of the main house as the last of the volunteers drove away. “The cities are where the trouble is.”
“And their families, and familiar things.” Ramona walked heavily up the steps and collapsed onto the porch swing.
I swiveled on my butt to face her. Dusty jeans didn’t even rate as a problem. Like Ramona, I’d been awake all night. “They’d be better off waiting here for things to settle down.”
Patti leaned against a railing. “What if they don’t settle down? What if those things are real?”
My mouth dropped open. I’d considered her a sensible person. “They can’t be. Magic isn’t real.”
She looked across the valley, across the open field mowed short for children to play on, to the apple orchard on the far side of the snaking road. “There was a video of that dragon eating a missile. The air force scrambled three jets to take out the dragon. Instead, it ate a missile, then vanished.”
I wanted to say that the video had to be faked, except that lots of people had recorded the action over Washington DC, including television reporters.
“The children are sick.” Ramona stayed on topic, focused on what mattered to her heart. “It makes sense that their parents want them near trusted medical care. Dr. Fayed is good, but he’s a GP. He and his office aren’t set up for long term, specialized treatment.” She put her hands on her knees and pushed herself up. “I’ll cancel next week’s camp. Maybe the one after, just to be safe.”
“The Summer of the Dragons,” I muttered.
“And everything else,” Patti said. “It makes me worry about the creatures we haven’t seen yet.”