All the latest
from the authors at
Here Be Magic

Monday, December 17 -
"HERE BE NEWS" - All the latest from the authors at Here Be Magic.

Wednesday, December 19 -
"FICTION SAMPLE--RAVEN'S SONG" - Can a reformed dark mage save an opera star from a deadly stalker? Read a sample of Shawna Reppert's story.

Saturday, December 22 -
This week's Bring It Back(list) feature:  "CHOOSING THE YULE TREE" - A new excerpt from The Holiday Spirit by Dani Harper. See below for details on this Christmas paranormal romance 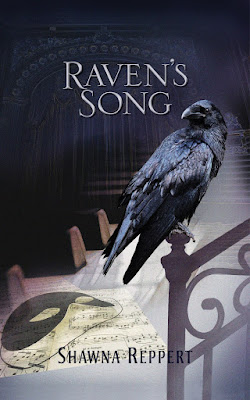 Can a reformed dark mage save an opera star from a deadly stalker?

This novella is, if you will, Ravensblood 1.5, set between Ravensblood and Raven's Wing. These urban fantasies are set in an alternate-universe version of the Pacific Northwest, a world of impossible choices where sometimes death magic is the lesser of the evils.

Raven's pardon and return still feel very new to him, and his attempts to find his footing again in the Three Communities are both helped and hindered by a GII agent who neither likes nor trusts him, but still needs his help.

This novella was originally published as part of Here Be Magic, a multi-author anthology which is no longer available for sale.
EXCERPT: https://herebemagic.blogspot.com/2018/12/fiction-sample-ravens-song.html

Shopping for Christmas, author Kerri Tollbrook is more annoyed than startled when a ghost tells her a gift she's about to buy will end up in the nearest donation bin. He's right, and well... gorgeous with those haunted brown eyes and self-assured bearing. Unlike most men, he's not afraid of her unusual gift. And the connection she feels surprises her. But even she can't date a dead man.


INVISIBLE FOR A YEAR...

Firefighter Galen McAllister is stunned the petite redhead can see and hear him. It feels almost normal to talk to another human again, but if things were truly normal, he'd alread be asking her out. The woman is a triple threat – smart, funny, pretty, even if she's insisting he needs to "cross over". He can't, not after an ancient evil ripped him away from his body. And he refuses to leave as long as the creature is free to do the same to others.

A RITUAL TO PURGE EVIL...

There's no time to kiss under the mistletoe. The demon with a taste for human life force is coming back for a final feast. Helping ghosts is one thing, but Kerri is determined to banish the monster by any means necessary, even if Galen only wants enough "answers" to help him take the demon down himself.


She can't let Galen die for real. He can't bear to put Kerri in the creature's path. But if they don't work together on this, they aren't the only ones who will die just in time for Christmas.

Our authors often take part in hosted giveaways and events, or sponsor their own.
Here's the latest!
...

Book 1 STORM WARRIOR is now $1.99
plus just 99¢ each for
STORM BOUND, STORM WARNED,
and STORM CROSSED