Not Your Average Vampire

See that title up there at the top of the page? Yeah, it’s basically a lie. Because, if there’s anything that doesn’t exist in the world of fiction, it’s a vampire that’s average. They’re all pretty much unique. Seems like everyone who writes in the genre has to put their own, individual spin on everything from sunlight, to garlic, to holy water, to reflections in mirrors, to whether or not vampires have to sleep in coffins And anyone who reads about vampires is likely going to have a very strong opinion about each and every one of those endless iterations.
I once read a series where the vampires didn’t drink blood. They subsisted largely on rare meat. And I don’t mean raw meat either. They cooked their steaks, just not very much. Speaking as someone who hails from a very-rare-steak eating family, that’s straight out heresy.
For the most part, however, I find all these various distinctions kind of neat. It’s fun to discover all the myriad ways in which one set of vampires might differ from another. Although. I have to say, no one’s ever going to sell me on the whole sparkling thing. Just sayin’
One of the weird things that make my Children of Night vampires different from other vamps is cookies. And I don’t even know how that came about, because that was long before the dark side/cookie meme came into being. Or, at least, long before I'd ever heard of it. I was only midway through chapter one of the first book in the series (In the Dark) when Damian suddenly went off script, and I ended up with this:

Finally they were alone. Damian sighed as he let go of their wrists. Reaching for the tiny strings that fastened his kimono he drew the garment around himself and secured it in place. “Now, then,” he said as he threw an arm around each of their shoulders and propelled them from the room. “Let’s go down to the kitchen and have something to eat while we talk, shall we?” Drawing them both even closer, he pressed a kiss against the side of each of their heads. “I baked cookies. Who wants chocolate chip?”

“This is so great.” Julie beamed at Damian as he slid a plate of freshly baked cookies onto the pristine surface of the antique kitchen table. She looked and sounded far more enthusiastic than Marc thought anything about the evening warranted. “I can’t believe you made us cookies. It’s been years!”
“More like decades,” Marc grumbled, resisting the force of habit that almost had him reaching for one. What was the use, after all? When they were children, Damian had made it a point to bake some kind of treat whenever the twins had a play date. It was for the sake of the other children, mostly, but also so that Marc and Julie would feel more comfortable, would know what to expect and how to behave on those rare occasions they were allowed to accept an invitation to play at someone else’s house.
But what was meant to be a comfort had backfired in his case. It had only made him feel more different from the other children, rather than less. The fact that they could eat “normal” food had finally convinced the then thirteen-year-old Marc to try and wean himself from his dependence on blood. After five days, he’d collapsed in the middle of a routine fencing lesson and a distraught Conrad had gone ballistic and had to be talked out of completely disassembling the kitchen. From that point on, there’d been a ban placed on any further attempts at cooking and any foodstuffs other than blood were strictly forbidden from even being brought into the house. It was a line drawn in the sand—very deep, very definite, very distinct. A line Damian had never once dared to cross. Until now. Which only made his actions tonight seem even more alarming.
“Does Conrad know about this?”

It’s actually turned out to be one of my favorite things about the whole Fischer-Quintano vampire family. I love how the never-been-human Fischer twins are often the most human of the bunch. I figure it’s a testament to their awesome upbringing at the hands of Conrad and Damian.
But really, when you think about it, vampires who like to snack on junk food just makes sense, you know? Why wouldn’t they get nostalgic, every now and again, for a taste of home, or for childhood memories? Who doesn’t like comfort food?  Plus, people eat a lot of things that have no nutritional value. Why should that change, simply because they’re undead?
If you're interested in reading more about my cookie-eating (and baking!) vampires, In the Dark will be on sale for only .99 from October 22 through November 5. In the meantime, you can check out my Cooking With Vampires Pinterest board with fun pics of Vampire-themed baked goods. 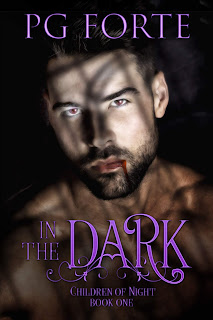 San Francisco, 1969. Vampire Conrad Quintano has been around for centuries—long enough to know that falling for a human is a terrible idea. Much less falling for adventure-seeking hippie Desert Rose. An even more terrible idea? Agreeing to raise her babies and protect them with his life.
Present day. Marc and Julie Fischer have always known they’re vampires. Raised in virtual isolation, they’ve never known their parentage or their unique status in the world. But once their uncle comes to take them home, the family reunion is nothing like they anticipated and they’re thrust into a world they’re completely unprepared for.
https://www.amazon.com/Dark-Children-Night-PG-Forte-ebook/dp/B073TSCFF7

Email ThisBlogThis!Share to TwitterShare to FacebookShare to Pinterest
Labels: Children of Night, Cooking with vampires, In the Dark, PG Forte, vampires