Posted by: Dani Harper, Author
I LOVE HALLOWEEN ... and I can't help but get a little nostalgic at this time of year. Today I'm revisiting a post I wrote several years ago. Hope you enjoy it!

The trick-or-treaters will be out in force in a couple of weeks, and the only defense against the invasion is to lay in a generous supply of Halloween treats. To defend against the danger of eating the candy ourselves, however, my hubs and I start off the month of October with a two-fold plan:

1. Wait until the day before Halloween so we have less time to be tempted by the treats.

2. Do. Not. Buy. Any candy that contains chocolate, so we won’t hear it calling our names in the middle of the night.


By the time the 31st approaches, however, I'll suffer an attack of remorse. I remember what it was like to be a kid, and how we stood on the sidewalk in a huddle comparing our treat bags --- I always wanted to be one of those houses that gave out "The Good Stuff".

Meanwhile, my husband's  reminiscences are much more practical and immediate: he remembers how much he likes Reese's Peanut Butter Cups! Regardless of our earlier plans to the contrary, one of us always ends up buying chocolate and lots of it. The kids might get some too…

Despite our personal addiction, chocolate isn’t the only enjoyable Halloween treat. I've polled enough people to know there are lots of other favorites out there.

But there are also candies that are the stuff of little kids' nightmares...

For instance, my grandparents seemed to have an affinity for some truly awful "treats" -- licorice diamonds that smelled like bleach, humbugs that lived up to their name, and peppermints that burned your tongue until you cried. My parents indulged their own strange tastes in the form of wax lips and wax cigars, rubbery gumdrops that were fruit-flavored in name only, shiny purple gum that smelled like soap, and candy cigarettes that looked and tasted like chalk.

And for the trick-or-treaters of my generation, there's ONE candy that looms over all...

UNIVERSALLY HATED?
When I was a kid, my treat bag felt like a sack of pebbles by the end of the night. That’s because a third of it was made up by petrified molasses kisses. Oh sure -- the OUTSIDE of a kiss certainly looked cute, with its brightly colored Halloween wrapping. But if you somehow managed to get inside (the paper was inevitably fused to the contents), it looked like a terrible mistake had been made.

The exact color of wet cardboard, there was no coating to buffer this "treat" and no filling to look forward to. Just the taste of pureed tongue depressors with a little scorched sugar mixed in. In fact, I’m fairly sure a secret deal had been struck between candy manufacturers and the pulp and paper industry in 1914 when these things were allegedly invented somewhere in New England.


Why these things were called “kisses” I can’t imagine. A kiss is something gentle, soft and pleasant. A molasses kiss usually had the consistency of hardened Gorilla Glue to begin with and only toughened with age. And speaking of age, I’m sure that some of the kisses I collected were old enough to be carbon-dated. If the trick-or-treaters didn’t take it all, I personally knew neighbors and relatives who used to keep the candy for the NEXT YEAR. And the next... and the next... (Believe me, I wish I was kidding).

This candy would have made an excellent emergency storage item: It lived forever and it would take an emergency to make you desperate enough to try to eat the stuff. It might be more useful as kindling in a crisis.


However hard a molasses kiss was, at least you didn't have to worry about breaking a tooth on it. You were far more likely to pull out an intact molar by the roots. This was because after half an hour of working the candy around in your mouth, you were lulled into thinking it would never soften up--and that's when the candy would abruptly cement itself around your teeth like some sort of sedimentary mouthguard. You could box or play football in perfect safety, but it might be days before you could pry your jaws apart.

People talk about how things were built to last in the good old days – cars, appliances, furniture, etc. Believe me, some of those Halloween kisses outlived Buicks. In fact, there are likely thousands of the fossilized things still lurking in china cabinets, upper kitchen cupboards, dusty candy dishes on mantels and boxes in the attic all over the country. Lying in wait like the undead, just waiting to be reanimated...

A few years ago, I ran across a forgotten cookie jar in the back of a cupboard when we were cleaning out a relative's house. The sight of the happy little Halloween wrappers gave me a wonderful burst of nostalgia – then a quick shake of the ceramic container broke the spell. The contents sounded like #3 gravel in a jar...

Acting quickly, I dumped the kisses into a bag, ran outside and threw them into the burn pile like a hobbit throwing a ring into the fires of Mordor.

“Hey, is that candy?” called a cousin.

"That's exactly what it wants you to think,” I said, watching to make sure the flames eventually consumed every last one. “I’m saving us.”

He just shrugged. “You gals take dieting way too seriously.”

You bet I do. In fact, I’m going to go buy some nice, safe fun-size chocolate bars right now!

JUST IN TIME FOR HALLOWEEN 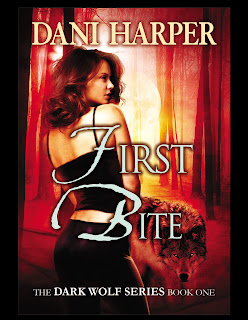 A reluctant hero. An unwilling heroine.


And a pack of wolfen Changelings in a dark paranormal tale that brushes the edges of horror...

FIRST BITE is on sale for the month of October on Kindle:  just $1.99

Geneva “Neva” Ross doesn’t want to die. But now that she’s been turned into a werewolf against her will, she’ll do anything to protect her family and friends even if that means taking her own life.

Too bad Travis Williamson saw her jump. A lone Changeling with a dark past, he feels compelled to use his powers to save her. The last thing he expects is to feel a connection to the strong-willed woman. And when Neva is hospitalized, Travis risks everything to kidnap her, knowing the approaching full moon will put everyone in jeopardy.

Bickering constantly to hide their growing attraction, Travis and Neva run from the authorities and from Neva’s sinister sire, Meredith de la Ronde. Meredith is determined that Neva will join her murderous wolf pack. Or die.