It’s been a while since I've had a new release, but I’m back with a new paranormal romance series about a coven of male witches in the service of the Morrigu. I have four books planned and the first three are written (the last one is plotted). I also had all the covers done as added motivation.

Each of the guys has some kind of special talent and there is a difference villain in each book so they can stand alone.

Cursed has quite a gothic feel, takes place in a creepy old house filled with death magic and there are some seriously weird statues in the garden. The hero has a death curse which has afflicted his family for a few generations and so is counting down his last few months. The heroine, well, she’s been alive for far too long even if she can’t remember all of it.

Hunted is very much an on the run story, while Embodied has a hero whose trying to balance being a witch a lawyer and a shifter (he's not doing it well). The hero in Stolen is a thief with an ex who needs his help. You can check out all the blurbs here.

While I had these books in my head for a while the stars never aligned for them until this year. I hope you enjoy the Coven of Raven. 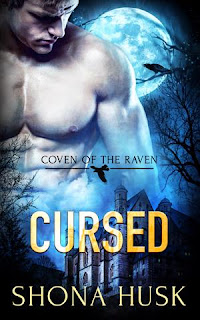 Cursed will be out on September 13

Oskar Quigley knows exactly when and how he’ll die.

Living with a death curse isn’t easy, but after generations of research handed down to him he thinks he knows how to defeat the Thomas, his great uncle and a witch gone bad who caused the problem. There’s just one thing he never accounted for: another victim.

Mylla has been Thomas’s servant for as long as she can remember, but her memories can’t be trusted. The marks on her wall add up to decades, and her diary is a muddled collection of rambling. When Oskar arrives to tend the gardens she needs to warn him that bad things happen, difficult when she can only talk on Thomas’ command. But she doesn’t need to talk to steal a few moments for herself in Oskar’s bed as she tries to convince him that magic is real.

With time running out and Thomas’s suspicions growing, Oskar is forced to act. But if living with a death curse is hard, learning to live is even harder.