Jill Garrison, a maintenance tech at the Sectors Amarcae 7 colony, goes to sleep one night as usual only to wake up in her nightgown stranded in the middle of a forest on an unknown world. There’s no time to think as she’s stalked by carnivorous predators and rescued by genetically engineered warriors calling themselves the Badari. Turns out they and she, along with her whole colony, are now prisoners of the Khagrish, a ruthless race of alien scientists. Working for enemies of the Sectors, the Khagrish have created the Badari to be super soldiers.
Aydarr, the Badari alpha, isn’t sure he can trust Jill but his attraction to her is undeniable. He impulsively claims her as his mate to prevent her death at the hands of the Khagrish.
Can he continue to protect her from the experiments already underway? Will his claiming her put his pack in jeopardy from their alien masters?
As Jill searches for a way to rescue her fellow humans and get them all to safety, she finds herself falling for Aydarr, despite the secrets he’s keeping. She has a few of her own.
The situation becomes dire when Aydarr and his pack are sent offplanet on a mission, leaving Jill unprotected, prey for the senior scientist. Can she escape the experiments he has in mind for her? Will she be able to thwart the Khagrish plans and liberate humans and Badari alike? How will she and Aydarr reunite? 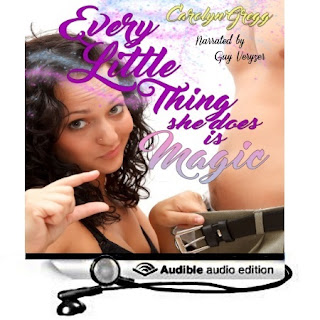 Gus Balfour has lived with his “shortcomings” all his life. He’s been picked on, made fun of, and obviously had problems in the bedroom. But through the years, he’s learned other ways to please the ladies. Or so he thought. When his girlfriend leaves because he simply doesn’t have enough to give, he decides it’s time to take matters into his own hands…or well, maybe a surgeon’s.

After learning about the complications and exorbitant costs that go along with the surgical enhancement, he thinks all hope is lost. But a name and number left by his housekeeper could change his life.

Syan isn’t the old, wrinkly witch he was expecting, but she quickly proves there’s no job too big, or too small, when you’ve got the magic touch.