The Power of Pets, Part 2

Posted by: Angela Campbell
Last July I wrote a post at Here Be Magic about the power of pets. Since my cat has been at the front of my thoughts lately, I decided it fitting to follow up on that.

Especially since 2017 has been another sucky year, at least for me.

My furbaby is my cat Dusti, and she has been my constant companion for 12 years. A month or so ago, she started vomiting every time she ate. She went from weighing 16 pounds at one point to now weighing 8 pounds. I didn't realize how dramatic her weight loss was because I had been instructed back in November by the vet to put her on a diet. When I realized I could feel her ribs, and she wouldn't eat or couldn't keep food down, I knew something had to be wrong. Her tests showed likely liver disease, and at one point, I was terrified I would have to put her down. I was nearly inconsolable. But she's doing better now. I don't want to say she's on the road to recovery because I've learned her condition can turn at the blink of an eye, but she's doing better and I hope she will continue to do so.

As I said last year, I'd probably lose my mind if I didn't have an outlet to escape from the bad news on TV, rough days at work, family drama, etc. For many of us writers, that's why we dabble in fiction. It allows us to channel our worries, fears, and emotions into something productive. When we're not writing, our go-to escape is reading books written by others, or movies or TV. And a good cuddle with a cat or dog goes a long way, too.

I found a good way to battle the blues is to start and end each day by watching a positive and fun video featuring cats, dogs, rabbits, horses, whatever non-human animal I can find. I'm partial to cats, but I love dogs, too, and pretty much anything in fur or feathers. And sometimes I find a video about an animal that reminds me that all humanity is not lost in man, too. It's amazing how much my attitude has improved in recent days since I started doing this.

Since I think the whole world could use a hug right now, I thought I'd share some of my favorite current videos – the ones that have made me smile and feel good about life, even if for only the four or five minutes after I watch them.

<
(What's not to love about a dog named Logan Handsomepants?)

(If you ever start to lose hope in humanity, remember there are people like this in the world)

And if you love pets and books as much as I do, check out my book series. Cats and dogs are secondary characters, and the stories are fun, frightening, and full of fluff (pets).


Hannah Dawson has a big problem: she’s just become the unexpected owner of a snarky cat, a loveable but not-so-bright dog… and their $10 million fortune! 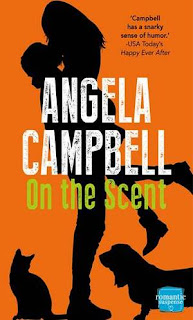 ***
Angela Campbell is the author of the psychic detectives series from Harper Impulse. Learn more about her and her books at www.AngelaCampbellOnline.com.