Posted by: PG Forte
I mentioned a few months back that this was going to be my Summer of Massive Re-branding, with all new covers for three of my series, and re-releases for two of them. By the time September rolls around, I figure I'll be lucky if I remember my name.

I'd hoped to spread things out a little more, but the two series that are re-releasing are both doing so this month, within a couple of weeks of each other. Today I get to do a cover reveal for the six new covers for my Children of Night series. And, because everything is happening all at once, all six books are currently available for pre-order as of yesterday.

Just a note on that. Although all the outlets are showing a price of 3.99 per book, the actual pre-order price you'll be charged is only .99. Which means you can get the whole series (well, less the two books I'm still writing, that is) for less than 6.00. Which is kind of an awesome deal.

The new covers are a fairly radical departure from the original series, and I'd love to hear your opinion of them. And, no, the decision isn't mine, so they won't be changed, but I'm still curious.


Release day is scheduled for July 31. Blurbs and buy links can be found on my website:
http://www.pgforte.com/ChildrenOfNight.htm

And now, without further ado, ta-da! 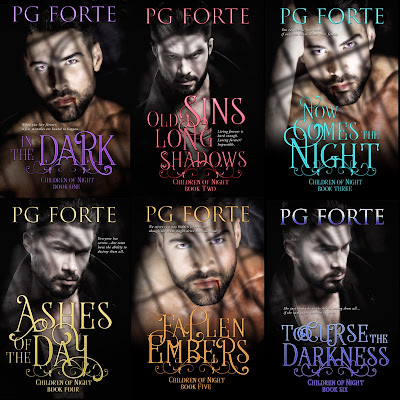