Not Quite a New Release

Posted by: Janni Nell
It's been a long time between drinks, as they say, or in this case books. The first book in the Bolde and Baulsey paranormal mystery series, Dead Monk Walking, was released last year. Since then my family's had a few ups and downs. The ups included my son's business expanding rapidly. Yay! The downs were mostly about the dog's ongoing cruciate ligament problems. Hopefully, he's had the last operation. He's such a sweetie. He doesn't deserve all the crap he's been through.

Anyway, I finally completed the second Bolde and Baulsey book. Better late than never, right? It's called Dead Lady Vanishing and it'll be released in February 2017.

To celebrate the upcoming release, the first book in the series Dead Monk Walking is on special for 99c for a short time only. 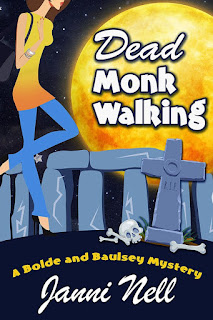 Vacations are a bitch. Or maybe it’s just me.

I’m Natasha Bolde, and honestly I’m no one special. Okay, I’ve solved a few mysteries, but I’ve always worked with my best friend and mentor, Clover. She passed recently, and now I’m taking what should’ve been her trip of a lifetime to Cornwall, Britain. It’s just like Clover to choose a place chock-full of mysteries. Why is the amnesiac woman digging in the fields? Can the local psychic medium really contact the dead? And who exactly is the ghost hunter hunting?

I wish Clover was here to help me solve these mysteries, but since she’s not, the best way to honor her memory is to solve them on my own. I’m determined to find the answers. Even if it kills me.