The Noise of Fur - Exclusive Excerpt 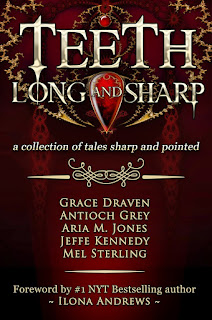 Very excited for the upcoming release of this anthology, TEETH, LONG AND SHARP.

The savvy Grace Draven, lover of all things dark and fantastic, had the idea for this title and invited the other four of us to write her a story with only that as the prompt. I've started reading the other stories and they're all spine-chillingly awesome.

My story is the shortest in the group - because that's how it worked out. I had so many ideas that would fit Grace's title, but none "felt" right. Finally, in rooting through my spreadsheet of Story Ideas (you knew, I had one, yes?), I found this title I'd noted down a year or two ago: THE NOISE OF FUR.

It came from riffing on Twitter, but I couldn't remember more than that. It was funny at the time.

The way it struck me at that moment, combined with Grace's title, TEETH, LONG AND SHARP, took me in a so not-at-all-funny direction.

I started writing the story, with only those two phrases in mind ... and discovered it as I went. That's the purest, most fun (and agonizing) writing there is for me. What came out is super cool, though.

Look for the anthology coming out October 6!

And now... a little glimpse of THE NOISE OF FUR.


She entered the old forest, moving from tree to tree, making little sound herself. There was an art to it. A skill that went beyond knowing where the leaves would crackle or how the bark of that branch had dried enough to crack. Her mother had taught her that being stealthy was about becoming, being so much a part of the woods—or the meadow, or the creek, or the great tumble of rocks that led to the hills—that she made no more sound than the quiet groans of creaking branches or the soughing of thunder wind in the canopy.
She belonged and the Thing did not. One reason it always made noise. And why she made sure not to.
She froze again at the grating crawl of movement, letting herself become one of the tree shadows. Silent and still always trumped silent and moving. Though it took both training and crushing will to make herself stay instead of fleeing as her baser instincts begged her to. She could escape easily, slipping through the trees like a dapple of sunlight, disappearing into the dark and warm spaces between. Her blood sang with the demand, heart hammering away with readiness, lungs straining to billow.
But she held them still.
Still.
Silent.
If she fled, she’d never see it, and her curiosity burned.
The noise scraped as nothing should, like down, but nothing to do with feathers. Just beyond that grove before the big boulder. Sifting out in mutters of menace, like crystal rocks screeching on flint, the sound rounded from both sides, not nearer on one more than the other, extending in butterfly wings of equal expansion. Tense with expectation, she poised for a glimpse.
The Thing sounded louder, soft and hot.


A growl of noise. A flurry of movement, punctuated by a rising garbled shriek... then gone.