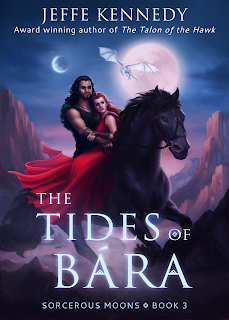 At last, the much-anticipated next installment in the Sorcerous Moons series.

With her secrets uncovered and her power-mad brother bent on her execution, Princess Oria has no sanctuary left. Her bid to make herself and her new barbarian husband rulers of walled Bára has failed. She and Lonen have no choice but to flee through the leagues of brutal desert between her home and his—certain death for a sorceress, and only a bit slower than the blade.

A Race Against Time

At the mercy of a husband barely more than a stranger, Oria must war with her fears and her desires. Wild desert magic buffets her; her husband’s touch allures and burns. Lonen is pushed to the brink, sure he’s doomed his proud bride and all too aware of the restless, ruthless pursuit that follows…

A Danger Beyond Death…

Can Oria trust a savage warrior, now that her strength has vanished? Can Lonen choose her against the future of his people? Alone together in the wastes, Lonen and Oria must forge a bond based on more than lust and power, or neither will survive the test…