Going Back to Find You by PG Forte 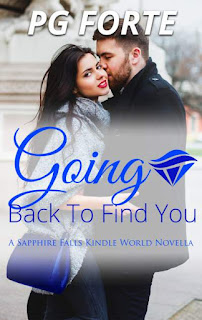 There’s a special delight in setting a paranormal story in a contemporary world. Going Back to Find You, which releases today, is a very classic vampire meets girl, vampire loses girl, vampire goes back to Nebraska to find girl again. But it’s set in a small Nebraska town where vampires and zombies and werewolves and faerie queens only show up at Halloween and are always revealed to be your neighbors in disguise.

My hero, Jason, appeared very briefly in the first Children of Night book, In the Dark. Ever since then, I've wanted to tell his story. But it just didn't happen.

Because even a vampire deserves a second chance.

When Jason Cook boarded the train to San Francisco, he didn’t plan on coming back. He never really thought he’d see Nebraska or Lizbeth Petersen ever again. But when an unexpected turn of events threatens the woman he’d loved and lost, he has no choice but to go back and try to make things right.

Lizbeth never thought she’d see Jason again, either—and she’s not so sure she wants to see him now. Her life’s a mess, but at least it’s her mess. And after a lifetime of other people making decisions for her, she’s looking forward to finally figuring out some things on her own. Besides, Jason already left her once when she needed him. Why should she trust him not to do the same again now?

Warning: This is not a drill. Vampires are invading your favorite, small Nebraska town this Halloween. Does this mean Type-O flavored booze will soon be the new rage in Sapphire Falls? Hopefully, it won’t come to that. But you never can tell…

“I’m not sure about these candles.” Hailey Conner Bennett gazed critically at the lamps Lizbeth Petersen had painstakingly arranged on the steps leading up to the door of her brightly painted wooden caravan.
“How do you mean?” Liz was pleased that she was able to keep the snarl from her voice. A big orange cat had wandered over while she and Hailey were talking. When it started pawing at the little glass cups Liz shooed it away. “Not sure about what?”
“I’m not sure they’re a good idea.”
Which was tantamount to saying nothing. Liz counted to ten and forced a polite smile. “Why is that?”
“Well, they’re a fire hazard.” A faint crease between Hailey’s brows revealed an uncertainty that the predator in Liz found irresistible—in a chase-her-down-and-drain-her-blood kind of way. “Don’t you think? I’m sure the fire marshal will. Especially with all the children who’ll be running around.”
Fair enough. Sapphire Falls first annual Halloween Festival had definitely been postured as a family-friendly event. And as the former mayor and current Director of Tourism, Hailey had both a point and a legitimate reason to involve herself in Liz’s business. But, all the same, Liz had to appreciate the irony. Being a vampire, she was undoubtedly much more concerned about the possibility of fire than even the most scrupulous of fire marshals.
“Not to worry. I’m using flameless candles. They might look real, but they’re battery-operated LED lights. The best part is that they’re all on automatic timers, which should look suitably spooky to any of the children who happen to be around when they start going on or off by themselves. Spooky or magical,” Liz said, correcting herself. “Depending on their outlook, I suppose.”
“Oh, good. I guess I should have realized you’d have thought of something so basic.”
“I wouldn’t be much of a psychic if I couldn’t intuit that. Besides…” Liz felt a surge of pride as she patted the exterior of her cottage on wheels. “I have to protect my investment. This is my home, you know, as well as my livelihood.”
Hailey’s gaze swept the camper once more. “You don’t live in it, do you? Full time?”
“Yes and yes.” Liz chuckled at the surprised expression on Hailey’s face. “Listen, I spent more years than you need to know about stuck in one place, dreaming of the day I could just pick up and go anywhere or anytime I felt like it. Now that day is here, and I’m determined to make the most of it.”
Hailey shook her head. “I couldn’t do that. Not just because Sapphire Falls is my home, I’d get claustrophobic.”
“It does take a certain temperament,” Liz agreed. She studied the woman for a moment, trying to disguise her hunger. Hailey was so poised and polished. She was young, healthy, strong—just the way Liz liked her meals. It was all she could do not to drool. “You probably have closets bigger than this.”
A frown creased Hailey’s brow. “I don’t know why you’d say that.”
“Professional psychic, remember?”
“Oh. Right.” Hailey continued to look uncertain, which Liz suspected was an uncomfortable state for a woman who was so clearly used to being in control.
She smiled reassuringly. “It’s okay to admit it. You won’t hurt my feelings.”
“Well, in that case…” Hailey’s own smile reasserted itself. “You might be right.”
“Maybe you’d like to see inside?” Liz held out her hand invitingly. She let a hint of compulsion bleed through her voice. Her fangs pulsed in anticipation when Hailey responded, moving toward her in a dreamlike manner. “That’s it. Come on up. Let me show you around.”
Liz stepped back, moving out of the way so Hailey could enter. She did so hesitantly, blinking in surprise as she glanced around the interior of Liz’s new home. “Wow. This place is amazing.”
“Thank you,” Liz replied, surreptitiously pressing the door’s secret latch so they wouldn’t be interrupted. She took a moment to cast her gaze around the room as well, trying to see the place from Hailey’s perspective.
Satisfaction surged. It was amazing. She was enormously proud of the job she’d done. After Felicia’s death had freed Liz to make her own decisions, she’d taken her share of the clan’s inheritance money and used it to commission a custom mobile home loosely based on a traditional Romani vardo. She’d paid a pretty penny for all the little extras. Hand-carved wooden panels covered the interior walls, their Art Nouveau curves picked out in gold. The velvet drapes and repurposed oil lamps gave the room a mysterious air while keeping it comfortably dark. Her bedroom was a marvel of vampire engineering, arranged to be as cool and lightproof as possible, its entrance hidden, like the lock she’d just engaged, to keep the curious from entering and the nervous from escaping. With the addition of an extra-large shower and mini fridge—crucial for cleaning up accidents and storing emergency rations—she was all set.
Going Back toFind You

Email ThisBlogThis!Share to TwitterShare to FacebookShare to Pinterest
Labels: Children of Night, Going Back to Find You, Kindle Worlds, PG Forte