Quest for the Perfect Ending Line

For tomorrow is another day.  Is there anyone out there who doesn't recognize the last line to Gone With the Wind?

The ending line of a novel doesn’t need to be as perfect as the first line, the hook.  As long as the ending satisfactorily ties up the book’s plot, or in the case of a series, at least leaves the characters with some breathing space, most readers will be happy. Nevertheless, the perfect ending line is like not only wrapping the plot up neatly, but tying it with a pretty bow.  And who doesn’t like a pretty bow?

I love ending lines that refer back to the very first sentence of the novel.  Or ones that are an in-joke between the two main characters.  They make me sigh with happiness.

Two Stephen King ending lines positively haunt me.  The first is from one of his Bachman books, The Long Walk: “And when the hand reached his shoulder again, he somehow found the strength to run.”  And from The Green Mile, “…sometimes, oh God, the Green Mile is so long.”  If you haven’t read the books, the lines will mean nothing, but if you have… shiver.

Robert Jordan’s epic fantasy series The Wheel of Time, always started chapter one the same way, describing a wind blowing and then “...it wasn’t the beginning, but it is a beginning.” Long before the final volume, A Memory of Light, released my husband correctly predicted it would end with the line “...it wasn’t the ending, but it was an ending.”  Really, no other last line was possible.

I recently spent considerable time trying to craft the perfect ending line for my YA book, Angel Eyes.  I love the ending lines for books one and two in the series and I wanted the third book’s ending line to have the same oomph: 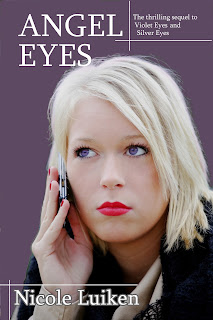 We would rather be your friends than your enemies. Don’t start a war you can’t win.  Violet Eyes.

More than anything, I wanted to learn to trust again. Silver Eyes.

The ending I eventually went with for Angel Eyes is… satisfactory, but not perfect. Sigh.

And now I’m getting close to the final chapter of a paranormal romance I’m working on, Where Lost Things Go, and I know I’ll soon be slaving over that ending line again.

What are some of your favourite or especially memorable ending lines of novels?