Another Rant About Kickass Heroines


In keeping with the post Evey Brett wrote on Sunday, I’m still on my own kick about the problem with kickass heroines. This is something I’ve been grousing about since before my House of Arkhangel'sk trilogy came out. My Anazakia is not what I’d call a kickass heroine. She’s just a girl. She’s not a victim or a damsel in distress, and she’s not a badass who knows martial arts, who can wield a mean sword or a Browning, or whose ability to conjure up powerful magic through sexual ritual blows more than minds. Ahem. Like I said, she’s just a girl—one whom I tossed into a really shitty situation and made her find her way.

On my regular post on the Paranormal Romantics blog a couple of weeks ago, I wrote about the Buffy marathon I’ve been having this month, and how it’s made me think about the kickass heroine problem all over again. I used to think it was Buffy’s “fault,” that everyone was emulating this successful formula in urban fantasy, but as I’ve been watching it through from the beginning, I realized that she’s just a girl. Yes, she has special enhanced strength as the Chosen One and trains hard to be a fighting machine, but she’s a well-rounded female character with wonderful flaws, who gets beaten down again and again, but gets back up because she has to. She makes dumb decisions in relationships with guys. She makes the hard decisions, too. She tries to make it through college while raising her kid sister and fighting demons, and has to deal with crushing debt from medical bills after her mother’s death. She has a bratty sister and she’s mean to her as often as not, like sisters are. 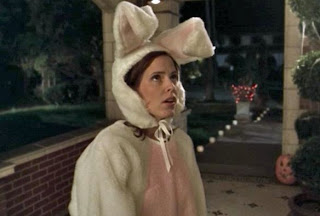 My favorite Buffy character, though, is Anya. A former vengeance demon demoted to being human, she has to make her way through the confusing world she’s found herself in after a millennium of having unlimited power. What I love most about her is her blunt speech, which rather than being rude and abrasive, is actually painfully real and honest in a way that exposes her heart.

Watching the episode “The Body”—one of the most brilliant hours of television-making ever, which should have won every award there is, but was never nominated, because, y’know, it’s just spec-fic, and “girl” spec-fic at that (grrr, argh)—in which Buffy’s mother is found dead of an aneurism, it’s Anya who reduces me to desperate, wracking sobs every single time I see it. There are “feels” all the way through the episode, but Anya’s blunt statements about not understanding what’s expected of her in the face of her friend’s mother’s death are utterly heartbreaking. At first, everyone is appalled at her, wishing she’d shut up and do the polite thing, because they don’t know what’s expected either. But she responds with the most heart-wrenchingly honest speech I’ve ever seen about death and loss on television.

Anya isn’t kickass either, even though she’s been a vengeance demon for a thousand years. She’s just a girl (or woman, as the show goes on, lest anyone think I’m infantilizing adult women with the “girl” term). She isn’t overly sexualized, or hyper-masculinized, or imbued with impossible strength or improbable weakness. She isn’t ridiculously smart, or annoyingly stupid. She’s human. That was the true brilliance of Joss Whedon’s series: human characters, with human strengths and weaknesses. And a nearly 5:1 ratio of female to male characters, just for a change. ;)

It’s frustrating that so many years later, it seems like we have less screen time for women, let alone realistic women, than ever. It’s frustrating that the response to that inequity for many seems to have been to create impossible women, just to compete with the complete lack of normal ones. But it’s heartening that this is a discussion that doesn’t seem to be going away lately, despite the lack of support for equality that seems to permeate the SFF world in particular. I just wonder if those in the Old Guard of both film and publishing have noticed that a female-centric and female-positive show like Buffy, ten years after it left the stage, still has a huge number of male fans. Because the excuse is usually that “girl stuff” doesn’t sell. Maybe it just hasn’t occurred to them that “people stuff” does, and girls and women are actually people. So let’s keep telling them until they get it.