Discovering the Power of the Disabled Protagonist 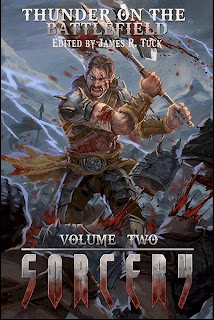 This is a very fun new anthology, Thunder on the Battlefield, edited by urban fantasy author James R. Tuck. There are two volumes: Sword (v.1) and Sorcery (v.2). I have a story, Negotiation, in the Sorcery volume, shown here.

Negotiation: A Story of the Twelve Kingdoms

General Uorsin escapes the last devastating battle, only to find himself alone on a mountain, feverish and no closer to finding the paradise that drives him on. Salena, greatest shapeshifter and magic-worker of her people, springs the trap she’s set to protect her land—and to prevent the ravager Uorsin from ever reaching it.

Together, they spend a night setting the terms that will determine not only the rest of their lives, but the fates of the peoples of the Twelve Kingdoms—and the thirteenth.


This is a bit of a prequel to the trilogy coming out starting next June, with The Mark of the Tala. It's not necessary to read the prequel as the trilogy stands alone, but it's a nice little taste of things to come!

I've started reading Westlake Soul by Rio Youers. It's a bit of a departure for me in my recent reading, because it's by a male author about a male protagonist. I don't think I was deliberately reading female authors and female POV, but I'd definitely gotten into a nearly exclusive pattern. The other interesting thing about this book is the protagonist is completely disabled. He was paralyzed in a surfing accident and is unable to move or communicate - except through the power of his mind.

I'm not very far in, but it's a fascinating premise. It also dovetails with conversations I've been having online, most notably with my friend, Sassy Outwater. For those who don't know Sassy, she's blind and has a guide dog companion named Kodak. You might have seen them at the RT Convention in spring of 2013, for example.

Sassy is on a quest for recommendations particularly of disabled heroines in romance novels. She's planning to do a full rant and review, so if you have suggestions, she's looking for any and all. Her site is being developed here. I'll be interested to see what kind of list she gets. After all, the romance tropes usually call for the feisty, nubile and always perfectly lovely heroine. That's been changing up in recent years, which is all to the good in my mind.

Speculative fiction, it seems, better lends itself to the disabled protagonist or otherwise "handicapped" hero. I'm using that word in the traditional sense - that some sort of weight is added to make the hero's journey that much more difficult. One famous example is Stephen R. Donaldson's Thomas Covenant, who suffers from - of all the horrible diseases - leprosy. Superhero stories are notable for the crippling burdens - usually emotional - that the hero carries. Think Batman with his haunted, traumatic past.

However, because I read primarily female-driven stories, it seems I rarely encounter the truly disabled heroine. Even if she's emotionally troubled, she's still physically attractive. And her psychic scars don't get in the way of relationships, like Batman's do - or they are temporary obstacles that increase sexual tension, but are easily overcome in the end.

I'm looking at my spec fic bookshelf, racking my brain for exceptions - much as I've been looking at my romance shelves (and yes, the twain do meet and mix it up) for ideas for Sassy's project. It could be my filter bias for the Happily Ever After, but I'm not coming up with much.

So, I'm throwing this out to you all. Examples of heroines in speculative fiction (I'm deliberately using that umbrella term to cover all genres of paranormal, urban fantasy, science fiction, fantasy, sword & sorcery, etc.) that are "handicapped" in some way. Bonus points for disfiguring disabilities.

And, because today just happens to be my birthday, I will give away digital copies of Thunder on the Battlefield: Sorcery to five commenters - international entries welcome! Even if you can't think of any heroines who meet these criteria (frankly I'm not expecting much, which is too bad), wish me a happy birthday and you're in. I'll choose a random five at midnight ET on Sunday, August 25 and we'll announce the winners in Monday's weekly Here Be News post.

Email ThisBlogThis!Share to TwitterShare to FacebookShare to Pinterest
Labels: disabled heroines, giveaway, Jeffe Kennedy, Negotiation, The Mark of the Tala, The Twelve Kingdoms, Thunder on the Battlefield