1. They’re animals in the bedroom.


2. They’re not shy about taking their clothes off.
3. Endurance is an animal instinct.
4. I (Grady) am a Shifter. Just sayin’.
5. Vampires aren’t real. And if they were, they’d be dead. Who the hell wants to cuddle up with a dead body?
6. Male Shifters are especially driven to satisfy their partners. It's genetic. Really.
7. Cats do it better. It’s a fact.
Note from Grady: We Chastells are a bunch of Ac-taw, Shifters living in the small town of Cougar Falls, Montana. Burke, the pride leader and my older brother, has gotten himself hitched. And now I've found "the one." But she's not convinced. Not yet. And to prove how incredibly wonderful I am, check this out...
An excerpt from Outfoxed
This is is so, so bad. In the raptor-run restaurant a block down the street, Gabby smiled and tried to focus on Grady’s words, not the firm lips shaping them. If anything, the distance from him the past two days had made her need even worse. It was like he’d awakened an inferno of lust inside her and she needed him to put out the flames. She hadn’t paid any attention to the men who’d come to visit her today. Even Miles, who’d stopped by her store to check out the new places in town, hadn’t turned her head.
Knowing how Grady tasted, how he felt in her hand, made it hard to do more than sigh at him. And then to watch him flirt with Millie, to tease her yet treat her with respect, to witness him gracefully sidestep the aggravating she-bears with ease without making a scene. She liked him more and more. There had to be something wrong with him…aside from the fact he couldn’t dance.
“Why are you looking at me like that?” He sounded wary.
“You’re awfully nice.”
He nearly choked on the swallow of beer he’d taken. “Nice?”
“Yeah. I’m trying to match this version of Grady with the man who taped a honk if you want me to make you purr note to the back of Burke’s pickup last week. Or the man who left his inebriated baby brother, naked as a jaybird, in front of Sonia Daly’s house.” Sonia was an older raptor who liked her men young and handsome. And drunk.
“I have no idea what you’re talking about.” He struggled to hide a grin and stared at his half-eaten plate of food.
“And last month. Who was it that dressed a stuffed animal—a dog, not even a wolf—in Monty’s sunglasses, covered the thing with his clothes and scent, and sent him to Sophie?”
“Sophie who?”
“She told me the note promised hot nights with Scooby if she played her cards right.” Scooby. She grinned at the remembrance. Monty had been more than pissed at the time, while Sophie had thought it hilarious.
“Gabby, I’m hurt. How could you think I would do any of those horrible things?” The snort of laughter gave him away.
She joined him, and they laughed so hard they annoyed the wolves, bears and raptors trying to have a romantic dinner nearby.
A waitress came over to see what the fuss was about. Gabby started to apologize but stopped when she saw who’d come to inquire. “Sonia Daly?” she squeaked.
“Yeah.” She looked Grady up and down. “Hey Chastell, you tell your brother I’m still waiting on that date he promised me.”
“Yes, ma’am.” They waited until she left, looked at one another and burst into laughter again.
Grady didn’t wait for management to kick them out. He plunked some cash onto the table, grabbed her hand and dragged her out of the restaurant, still trying to catch her breath.
They stopped a few stores down from the restaurant. She turned to say something when their gazes caught. That tingle in her belly turned into an outright flutter of something special. Something warm and happy and right. Then he sighed her name and took her in his arms.
To read more, click here.
Outfoxed by Marie Harte 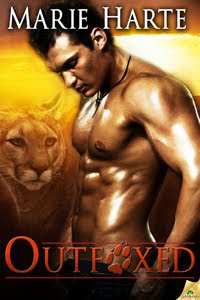