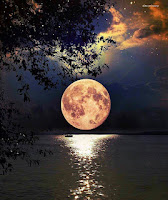 "Strawberry Moon" “Straw-berry Moon, shi-ning in June…” Grabbing his pencil, Stuart jotted the notes down on the sheet of notebook paper with its hand-drawn staff. Picking his guitar back up, he continued. “Months with my love aren’t enough.” He paused, then tried again. “This time with my love’s not enough. Okay, that sounds better,” he muttered, and wrote the words down on the paper.  There was a knock on the bedroom door before it opened, and China stuck her head around the door. She took in the sight of him sitting on the foot of the bed, spiral notebook beside him, and smiled. “What are you doing?”

“Oh? What about? How to get out of emptying the dishwasher?”

He made a show of slapping his forehead with the palm of his hand and groaning. “I knew there was something I forgot to do!” He started to lay the guitar on the bed when she held up a hand to stop him.

“Never mind. I’ve already done it.” She stared again at the instrument. “You haven’t touched that thing in ages. Why all of a sudden are you interested in it again?”

She nodded, but he got the impression she didn’t believe him.

“No. Really,” he continued. “In fact, I’m entering it in the KGKW song contest.”

She lifted an eyebrow at him. “You’re entering a song contest.”

“Grand prize winner has their song recorded by Lowvington.”

“Lowvington? The country and western duo?”

“You really believe you can write a country song they’ll like enough to record,” she flatly stated again.

“Why not? I think I have just as good a chance as anyone else. Besides, the contest is open to non-professionals.”

She let out a bark of laughter. “Then you oughta win. You’re as non-professional as they come. So what’s your song about?”

She looked perplexed. “The full moon?”

“Yep. This month the full moon’s called the Strawberry Moon.”

“It’s also been called the Hot Moon, and the Rose Moon.”

He scratched the side of his nose with the pencil’s eraser. “I think it’s more because of something to do with strawberries. Either this is the month they bloom, or you’re supposed to plant them this month, or the strawberries are in season this time of year. Hell, I don’t know for certain, but the entry has to be in by June fifteenth.”

“And the winner will be announced…”

“And the winner’s song will be released…”

“Mighty short time frame to cut a record, isn’t it?”

Stuart shrugged. “Not my problem.”

“So what made you decide to do this?”

“I dunno. Got the inspiration, I guess. It’s been a while since I wrote anything.”

“Even longer since you performed, back in your college days.” Her eyes dropped to the guitar. “So what’s your strawberry song about?”

He shrugged. “What are most country songs about?”

“Trains, trucks, huntin’ dogs, lost loves, cheatin’ spouses, hard drinkin’, or country livin’. Did I leave anything out?” She was teasing him, and they both knew it.

She laughed at that one. “All right. So don’t tell me. But in case you don’t win, will I eventually get to hear it?”

“Yeah. I’ll treat you to a personal private concert.”

She pointed a finger at him. “You’re on. By the way, I came to tell you supper’s on the table.”

In actuality, he broke his promise. Having picked up the guitar to resume his composition, he lost track of time. It wasn’t until he heard the TV in the living room that he remembered he was supposed to have gone to eat. Chagrined, he went into the kitchen and found his place still set on the small dinette. All except for his plate, which she’d filled and placed in the microwave for him to warm up.

After he finished his meal, he cleared the table, and put his dishes in the dishwasher before starting it. Then he returned to the bedroom to continue working.

At some point, his wife knocked again on the door again. This time she walked in. “I hate to disturb you when you’re in the middle of a streak of creativity, but somebody has to get up early tomorrow and go to work.” She tapped the notebook. “Care to take this into the living room?”

“Nah. I need to let it stew overnight. Give me a fresh perspective in the morning so I can finish it.”

She smiled at him over her shoulder as she undressed. “How’s it going?”

“It’s going.” That’s all he would say. One way or another, he wanted the end result to be a complete surprise. He had no hopes of winning, but that wasn’t the point of composing the piece. China’s birthday was July first, and he planned to serenade her on that special day.

The following morning, he cleaned up their breakfast dishes. After that, he brought his guitar and spiral notebook into the living room. By the time his wife got home from work, he’d finished the song and was making a clean copy to send to the radio station.

“Still gonna make me wait to hear it?” China teased.

He grinned. “You’re welcome to read it.”

She snorted. “You know I can’t read music.”

“Then read the words.”

“I think I’ll wait until we find out who won.”

No more was said about the song. On the evening of the twenty-eighth, the two of them turned on the radio to await the results. China reached over to take his hand, giving it a squeeze. “Don’t be upset if you don’t win.”

“I won’t,” he confessed. “Actually, I’m pretty proud of myself. I picked up my guitar for the first time since college, and I wrote a song.” He smiled at her. “It felt good.”

She returned the smile. “I’m pretty proud of you, too.”

“Now for the moment you’ve all been waiting for,” radio personality Irwin Carmichael broadcasted. “And to announce our winner, let’s welcome Grammy award-winning duo, Lowvington! Thanks for coming, guys!”

“I heard you two had a difficult time coming to a decision as to the winning song,” Carmichael stated.

“We had hundreds of entries,” Cynthia Lowvington declared. “So many of them were so good. So, yeah, we had a hard time narrowing it down to one.”

“Well, I know our listening audience is sitting on the edge of their seats. Who will do the honors?”

“I will,” Buck offered. “The winning song is entitled ‘Livin’ the Country Dream,’ and was written by Ernest Bookings of Tramherst, Illinois.”

“Congratulations, Mr. Bookings!” Carmichael crowed. “Can we get a little taste of what it sounds like before its official release in two days?”

“Sure thing,” Buck agreed. “I brought my guitar just for that. Here we go, ladies and gents. A little preview from ‘Livin’ the Country Dream’ by Ernest Bookings.”

He strummed a few chords, then he and his wife, Cynthia, began singing. “I’m a country kiiiing. She’s a country queeen! And together, we’re livin’ the country dreeeam!”

“You gotta admit. It’s got a catchy beat to it,” China remarked. She leaned over to kiss her husband’s cheek. “Even though you didn’t win the contest, you did with me, honey. You’ve made a major breakthrough, and I couldn’t be more proud of you.”

He chuckled. “I gotta admit, it felt good. It felt… Hell, it felt fantastic, doing something I used to do. Knowing I still got the chops.”

“That’s not all, Irwin,” the woman informed him. “Like we said, we had literally hundreds of entries. Our purpose, of course, was to find one we felt would be a good fit for us, and maybe become a solid hit.”

Buck took over. “Remember back in the day when songs used to be pressed into wax and released on forty-five RPM records?”

Carmichael chuckled. “Now you’re dating me. But, sure, I remember those days.”

“There was an A side to a record that was supposed to get the most air play and be the hit,” Buck continued. “The B side was recorded as a backup mostly. But some B sides got enough air play to become a hit, too. The Beatles were very adept at that game.”

“What are you trying to tell our listening audience?” Carmichael asked.

“There’s one entry that struck me where it counts the most. Here, in the heart,” Cynthia confessed. “It wasn’t our grand prize winner, but I couldn’t get the words out of my head. So I convinced Buck to release it as a solo piece.”

“No band. No orchestra. Nothing but me and my six-string,” Buck said.

“Tell us more,” Carmichael urged. “What’s it called? Who wrote it?”

“It’s called ‘Strawberry Moon,’ and it was written by a man named Stuart Paget,” Cynthia revealed. “Mr. Paget, if you’re out there listening right now, thank you for this beautiful testament to love.”

China gasped, a hand to her mouth. She turned tear-filled eyes to her husband. He nodded. “Just listen.”

“I don’t deserve the kind of love you always give to me. I don’t deserve the patience and understanding that comes with it. But if there is a God above who grants the wishes and dreams of losers like me, he proved it tonight…with the brightest full moon in the sky.

“Strawberry Moon, shining in June, showing the light of love in my woman’s eyes. Having the faith, and giving me hope when I was reaching the end of my rope.

“This time I have with my love will never be enough…”

The singer’s voice trailed off.

“Oh, but I have to,” Buck countered. “You’re gonna hafta wait for the record to come out to see how it ends. And, trust me, you’re gonna wanna hear how it ends.”

Stuart looked over to find tears sliding down his wife’s cheeks. “They mispronounced my name,” he softly remarked.

“They always do,” she replied brokenly, reaching for him.

He grabbed her around the waist and pulled her into the wheelchair and into his lap where she softly sobbed against his neck. Stroking her hair and back, he tenderly sang, “When I came back from overseas, I was a broken man. But your love made me whole again. You’ve shown me over and over, and day after day, how lucky I am.

“So, Strawberry Moon, shining in June, keep showing the light of love in my woman’s eyes. Having the faith, and giving me hope when I was reaching the end of my rope.

“This time I have with my love will never be enough… But as long as I can spend the rest of that life with her, I’ll know that I’ve been blessed.”

He kissed her forehead and continued to hold her. He’d never been overly demonstrative with his emotions, but he’d finally found a way to express those feelings in a way she and the whole world could understand. And accept.