From the Archives ~ Going To The Chapel by PG Forte

This post originally appeared in June 2019. I'm posting it again now because Going To The Chapel is one of over 500 books that you can get ABSOLUTELY FREE for one day only (this Thursday, June 23) as part of a multi author, multi genre romance promo at  https://www.romancebookworms.com 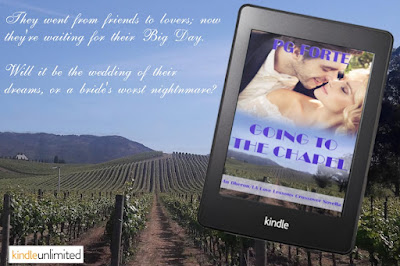 Yesterday I released my novella Going To The Chapel for the second time. But it's not a re-release, exactly. The venue for the wedding has been changed, so to speak. When I originally published this story--only two years ago! It was set in the Sapphire Falls Kindle World. I love Sapphire Falls. I would have been happy to leave my story there forever--and had actually planned to write a couple more stories set there--but Amazon decided it was no longer supporting the Kindle World program, which meant the secondary characters from Chapel (I'm looking at you Wyatt and Arielle) would never get their HEA.

That broke my heart. I started falling in love with my bad-boy biker from the moment he drove his loud-ass machine up Main Street. I started planning his story right then and there. By the time Amazon lowered the boom I had a title, an outline, and a cover. But without access to Sapphire Falls I really had nothing. My only option was to take the action out of town. But where?

Luckily, I had a couple of quirky, small towns of my own to choose from. Atlas Beach, New Jersey and Oberon California. I'd just written a trilogy set in Atlas Beach, New Jersey, so that was the immediate front-runner. Plus, The characters from Going To The Chapel were originally part of my LA Love Lessons trilogy. I'd already been promoting the two trilogies together under the Love From Coast to Coast slogan. So it made perfect sense to set my story there.

In addition, summer thunder storms feature heavily in Going To The Chapel, and of those two locations--Coastal California and the Jersey Shore--only one has summer storms, like, AT ALL. However, a lot of the action in the book takes place on the heroine's family's farm. And, while it's not the first thing you think of when you think of the Garden State (okay, it's probably NOWHERE on the list of things you'd think of when Jersey is mentioned) there is still some farmland to be found there--not to mention the best tomatoes EVER. But, despite all of that, Atlas Beach was just not rural enough for the story.

Oberon, on the other hand, is plenty rural. That's part of its charm. It's also quirkier than Atlas Beach, and already has a well established festival calendar--which was something else I needed for the story to work. What it doesn't have, in the ordinary way of things, is big summer thunder storms, but on the other hand, Oberon's magical, mystical vibe doesn't actually preclude the possibility of atypical weather either. SOLD!

There were a lot of adjustments to be made moving a story from the middle of the country to either of the coasts. In some ways, California and New Jersey have more in common with each other than either of them do with Nebraska. Or maybe that's just how it seems to me, having lived in NJ and CA (and NY and FL) and only ever having visited NE. Among other things, the bonfire, skinny dipping and mud-run afterparty had to be moved from their original riverside location. Because while, yes, Oberon does have multiple small rivers, ponds and creeks, socializing on any of them just isn't part of the culture. All the beach-going and water sports (surfing, for example) take place on the Bay. Which is as it should be. lol

Overall, I think the transplant was a success. I hope you'll enjoy this NEW edition of Going To the Chapel; and I look forward to releasing Wyatt and Arielle's story, Going Up The Country, this fall.

Going To The Chapel is currently available only at Amazon, and can be read for FREE as part of the Kindle Unlimited program.