Since Yesterday was Earth Day, I figured a Spring-themed excerpt was in order. A Taste of Honey is the fourth book in my Oberon series--and features one of my favorite couples, Lucy and Dan Cavanaugh. Unfortunately, it's not currently in print, but you can still get a copy of the prequel (see details below). 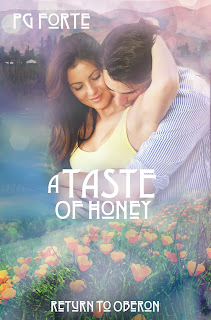 A Taste of Honey
Oberon 4.0
Blurb:   For Lucy Greco Cavanaugh, life is a dream come true. She has it all. The perfect family. The perfect husband. The perfect marriage. What more could she wish for? Other than the chance to do it all again. To experience once more the agony and ecstasy of falling in love with the man of her dreams. To recapture the joy and uncertainty that comes with starting over.
​ As far as Dan Cavanaugh is concerned, his life has become a nightmare. His storybook marriage is on the line when Deirdre Shelton-Cooper, the runaway daughter of a former girlfriend arrives in Oberon intent on proving Dan is her father. Even though he's convinced the girl's claims are false, Dan decides his only chance to keep from losing everything lies in keeping her very existence a secret from his wife and family.
But, sometimes, what you don't know can hurt you--and those you love. When Deirdre, masquerading as a surfer girl named Monica, accidentally hooks up with their son, Seth, Lucy and Dan are left to wonder: has their perfect, fairy-tale romance, turned into a classic Greek tragedy?
Sometimes you get exactly what you wish for. And it's more than you'd ever dreamed.

Excerpt:   Lucy drove out to the nursery early that afternoon, with the windows rolled down. No Doubt’s Tragic Kingdom, an album she’d ‘liberated’ from her teenage son’s music collection several years earlier, was blasting from the Explorer’s CD player, and a plan for fixing the deteriorating relationship between her husband and her son was cooking in her head. In fact, if things worked out the way she hoped they would, she might even be able to give her own relationship with Dan some added spice.
It was a glorious Spring day. The air along the coast was warm and lushly scented with yerba buena, eucalyptus and sage. Fat, majestic puffs sailed across the sky, casting cloud-shaped shadows onto the earth and sea below, further mottling the already variegated landscape. When she turned off the coast road onto the canyon drive that led to the nursery, she saw that the hills that lined the way, gray-green, emerald, and gold for most of the year, had been transformed. They’d blossomed overnight into an almost endless expanse of orange and blue--mostly California poppies and lupine--disrupted only where the spiky silver foliage and dried flower heads of wild artichokes broke through to tower above them.
It was the same thing that happened every year, but, as always, the beauty of it took her by surprise and made her catch her breath.
It was a perfect day for a picnic, she had decided after leaving Marsha and Scout that morning; and so she had gone home and packed a basket with which she hoped to tempt Dan to join her at Seth’s ball game this afternoon.
The relationship between the two men in her life had become so strained of late. And, even though she had taken care to pack all of Dan’s favorites--marinated artichoke hearts, olives stuffed with sun dried tomatoes, roasted eggplant and goat cheese sandwiches on fresh foccacia bread, and a mint-mango salad--she wasn’t sure that even that would do the trick.
It wasn’t so much that she feared her husband’s relationship with their son was in any real danger of becoming irrevocably damaged, as had happened to Dan’s relationship with his own father; although the possibility had certainly occurred to her, and more than once. It was just that it was so very obvious how much both he and Seth were suffering from their estrangement. And it would be good for Seth to see that, annoyed as he often was with him, his father still supported his efforts.
Besides, she knew very well that her own attendance at his games was almost more frustrating for Seth than supportive. Despite all her years as a spectator, Lucy still seemed to be missing the finer points of the game. Their mutual interest in baseball had always been a passion that Dan and Seth enjoyed sharing. And really, what was the point of sports, if not to allow men the opportunity to renew their bonds with one another without shedding too much blood?
She pulled off the road before she reached the nursery’s main entrance, unlocked one of the gates that led directly into the fields, and detoured through the back of the nursery’s grounds to check on her hives. Sunlight shimmered in the air, and as she walked through the field she breathed in deep lungfuls scented with the heady fragrance of flowering plants and warm earth.
The bees were everywhere; crawling on the flowers, filling the air with their busy flights, and clustering around the hives’ entrances in a carefully choreographed confusion. Lucy reminded herself to keep all her movements slow as she moved among them. She was entranced by their gentleness as they detoured around her. Even without the honey, she’d enjoy keeping them. Of course, she hadn’t been stung yet, although everyone who worked with bees assured her that it was inevitable, and she hadn’t yet been forced to contend with a swarm, either. Perhaps she’d feel a little less enthusiastic after either of those occurred. But for now, it was a terrific little sideline business.
She watched the bees for several minutes longer, observing their activity, trying to take a count of the bees as they moved in and out of the hives, as she’d been taught to do; looking for anything unusual, any suggestion that the hives were ailing. Finally, satisfied that all was well, she slowly turned and walked back towards her car. She’d come back out here this weekend, with all her equipment, so she could inspect the hives properly, but right now, she had an even more interesting project to work on.
Seth was not the only one whose bonds with Dan could use a little renewing, she thought. It had been months since she and Dan had enjoyed the kind of romantic adventure she had planned for them. Altogether too many months. And man could not live by sports alone.
She’d included a jar of her honey in the picnic basket. If she and Dan could find a private, secluded little spot for their picnic, perhaps she’d find a way to increase his appreciation for her new hobby.
*  *  * 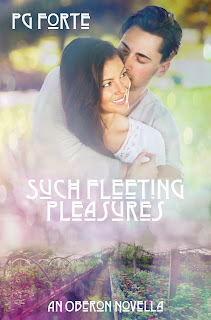 Such Fleeting Pleasures
An Oberon Prequel Novella 0.5
Love wasn't always strawberries and cream for Lucy and Dan Cavanaugh...or was it?
In this Oberon prequel, we travel back in time to see how it all began. ​ Most of the material in this prequel novella (set some eighteen years before the series begins) also appears as flashback scenes in A Taste of Honey. ​
Although the series as a whole is not currently available, you can access a FREE DOWNLOAD of this novella when you join my Facebook group: The Crone's Nest.
​ Read an excerpt HERE