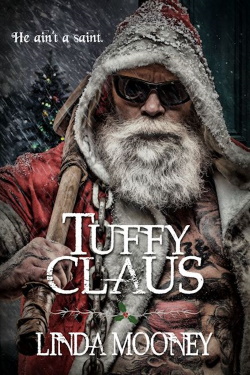 Note: This is a sweet romance, but it does contain language and scenes of violence.

It’s another night on the job for Deputy Sheriff Barbara Mero, giving chase to a suspect in a stolen vehicle. But when someone beats her to the perp, she’s not sure whether to step in or not. Before she can stop him, a sledgehammer-wielding bearded biker on a red Harley delivers his own punishment, but with his parting words, Babs isn’t so sure he’s another bad guy.

After further investigation, Babs knows this vigilante “Santa” meant well, but there’s no proof he was even there. And after a few more run-ins with the red-cloaked badass, she’s torn between duty and justice, but in her heart she knows he’s the real deal.

You see, there’s a side of the story of Santa that doesn’t get told, and that’s where Dominik comes in. Being the twin to Kris, Dom’s job isn’t near as merry, though still necessary, answering the letters from the kids who want more than just toys. Those who want a better, safer life, food, and shelter. Basic needs a kid shouldn’t have to wish for on Christmas. Although he’s accepted his own lot in life, Dominik still has one regret. It’s a lonely life.

There’s another side to jolly old Saint Nick, and he ain’t a saint.

Warning! Contains German chocolate cake, a modified red Harley, Sadie, justice served, a child's letter to Santa, a coffee date, and the promise of love when no hope of love had ever existed.