Bring It Back(list): A Sight To Dream Of by PG Forte 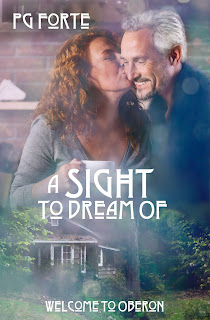 A  Sight to Dream Of is the second book in my Oberon series--which is not currently available.  The story takes place over the Fall Equinox, which was just this past week, and that put me in mind of the following scene.

BLURB: Sam Sterling is a man with problems.  Including a partner who is trying to kill him, and a nosy reporter, who's just turned up dead! It's going to take a miracle to save him.  Or, better yet, an angel. ​

Marsha Quinn is used to being called a witch.  After all, her abilities as a psychic make a lot of people uncomfortable.  But no one has ever called her an angel before!

Falling in love was not a possibility she'd ever envisioned, until Sam the skeptic arrives in Oberon, and teaches her to see past the scars she carries, and the lies he's told her, to the love that lies within their hearts and minds.

When she reached the glade, Marsha put down her bag, and glanced around her. The grass felt cool and slick against the soles of her feet, and the energy in the little glade seemed to reach out and embrace her. She could almost hear the music Sam had been listening to earlier—as thought it were still echoing in her head. It was so perfect for the evening, she thought, remembering that in certain Celtic traditions this month was called The Singing Moon. She nearly laughed aloud when she recalled one of the other names she had heard for it—this one from a Native American tradition. The Ducks Fly Moon. Sam would get a kick out of that. She’d have to remember to tell him.

Crouching in the grass, she began to remove the tools from her bag: Her drum and a large crystal cluster, which she placed in the North. Her feathered wand and the smudge stick of sage, cedar and sweetgrass in the East. Her pipe and tobacco, and a small lantern in the South. A silver bowl, partially filled with water from the creek, and her conch shell horn in the West. And in the center of the circle, on a flat piece of granite Celeste had long ago embedded in the grass, a small, iron cauldron. Finally she was ready to begin.
She put the bag down, outside the boundaries of the circle she was about to cast and--ignoring the hairs rising at the back of her neck, resisting the urge to glance over at the cabin--she removed her robe, and dropped it on top of the bag. Skyclad, she re-entered the circle, maybe a little more aware than usual of her nakedness, but determined to put every other thought out of her mind, except for the work at hand. Picking up the matches and the smudge stick, she set to work purifying herself, and the space around her.
* * *
Sam reclined in the window seat, as the shadows deepened in the little grove. Marsha moved about in the glade with the same unselfconscious dignity he had noticed on Sunday, as though she had merged, in some fashion, with the place itself. He reached for the wine bottle and poured himself another glass, scarcely taking his eyes from the window for an instant. The sight before him was far too compelling. He was familiar with the popular wisdom that eavesdroppers seldom learn anything to their advantage, apparently the same held true for voyeurs.
He had been curious about the ceremony she was performing. But satisfying his curiosity carried a steeper price than he’d guessed. He knew the sight of her, bathed in moonlight, would be with him for a long, long time, and would bring him little peace.
Although the series itself isn't available, you might enjoy the Oberon short stories that are included in the following anthologies:

It's the most wonderful time of the year...for revenge.

Halloween is a time for tricks, mayhem and murder. This collection of Halloween tales follows the wronged as they seek retribution for the crimes against them.

By whatever means necessary.

Experience the magic of romance this Christmas.
Holiday Kisses is a festive collection of ten exclusive Christmas stories that will make you fall head over heels in love. Are you ready to take a journey with us? Get into the Christmas spirit with these swoon-worthy romances this holiday season.  ️
Stories by Adina D. Grey, Ann Grech, Maci Dillon, Rosie East, Samantha Baca , CJ McKnight, PG Forte, Andrea Marie, ️Holly J. Gill, and ️Lynn Stevens
Buy link: https://www.amazon.com/Holiday-Kisses-Sweet-Christmassy-Anthology-ebook/dp/B09BD4V8V7