We celebrate Thanksgiving the day after turkey day at our house. We started the tradition as a compromise with my kids. They were conflicted about where to spend Thanksgiving. No one wanted to miss dinner with their family. We talked about brunch in the morning or dessert later in the day.
In the end, I opted for the day after. It was not a hardship. I did it selfishly. This way I have them all to myself. The kids, and their in-laws, love the idea.
I start cooking on Wednesday. That's another benefit of celebrating the day after. No turkey. Everyone's had their fill on Thursday. I can be a bit more creative with the menu. Although the family still demands the same menu each year, butternut squash soup, roast leg of lamb with mint jelly, brisket, sweet potato souffle (with marshmallows), green beans, mashed potatoes (yes, even though there are sweet potatoes), and a salad. My daughters bring dessert.
Today the family will begin to gather. Our son and his new wife will drive to New Jersey from Boston. Our two daughters and their families will move back home on Friday and stay for the weekend. It will definitely be a houseful but I wouldn't want it any other way.
For me it's all about family. The coffee runs to Dunkin Donuts, the late night outing to the local ice cream shop, and flopping on the sofa watching movies or football with a large bowl of popcorn. It's magical to me.
I also look forward to Monday when they all go home but I know it's only for a few weeks. We'll do all again in three weeks. This time with presents!
If you're tired of watching football or just want to escape, I have just thing. The Pirate's Redemption. 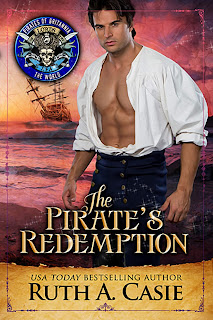 After her beloved father dies, Moira MacDougall becomes chieftain of their small clan. She is tested on every level, not only by her councilors who question her every move, but also by an exiled Englishman who raids her village under the guise of a notorious pirate, Gareth Talbot.


He wants the secret weapon Moira possesses, and will do anything to get his hands on it—including committing murder so he can give it to King Henry to prove his worthiness and be welcomed home.
Moira will follow her destiny and do whatever is necessary to protect her clan.
The real Gareth Talbot is through with love. His last romance did not end well. He suffered a broken heart and doesn’t trust women.
Humiliated, Gareth goes to sea and becomes a captain for MacAlpin, the pirate king. When raids along the Scottish coast are blamed on him, he seeks revenge. Nothing less than death will do.
Moira and Gareth are on different missions, but seek the same goal. Can they work together and eliminate their greatest enemy, and in the process, find the one thing they didn’t know they were searching for, true love?
Buy Link: Amazon KU