Becoming the Heroine I Want to Be in the World 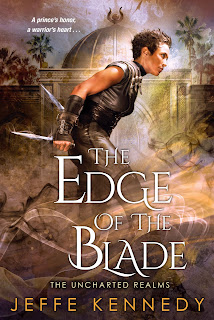 As I settle into cleaning up the detritus from celebrating Christmas with my family, and turn my thoughts to clearing the mental decks for the new year, it’s interesting to see THE EDGE OF THE BLADE release today.

It’s unusual to have a book release so late in the year—kind of a vagary of traditional publishing schedules—but that’s not what’s on my mind so much. No, instead I’m thinking about the year ahead and the challenges it poses.

Usually my new year’s resolutions are all about me. What I want and need to change in my own life. The inevitable paring down of the diet to include fewer cookies, less wine and ... well, less food, full stop. There’s always my setting of writing and reading goals. This year I hope to wrestle some of the finances into obedience.

But this year, I’m thinking about the larger world, too. One of the outcomes of the U.S. Presidential election is that I’ve had more conversations about politics in the last two months than I remember *ever* having. What’s going on here reflects what’s going on in the larger world, with frightening destruction by terrorist and totalitarian regimes—and the election of ultra-conservative governments in response to that fear.

A lot of my thoughts about what I want and need from the coming year have to do with how I will handle what may come.

So, it’s interesting to have Jepp’s book release right now.

Jepp isn’t a hero. Not exactly. She does what she needs to do in the moment. She is essentially fearless, has depthless confidence in her ability to fight off the worst to come at her—and she stands up for what is right. What she values most is simple and straightforward: the freedom to be who you are and do what you want to with your own life.

She’s a person who fights without hesitation for herself and for others.

It turns out to be fitting, then, that she’s essentially launching this new year for me. I want to recapture what living in her head was like. Having her courage, her confidence, yes, but also her fierce lust for life. She finds everyone beautiful. She enjoys every moment to the utmost. She loves, deeply and without shame or regret.

Maybe she is the hero I’d like to be. Wishing you all a peaceful and enriching end to the year. More, I’m wishing you all courage, fortitude and joy to carry into the new year.


THE EDGE OF THE BLADE

The Twelve Kingdoms rest uneasy under their new High Queen, reeling from civil war and unchecked magics. Few remember that other powers once tested their borders—until a troop of foreign warriors emerges with a challenge . . .

Jepp has been the heart of the queen’s elite guard, her Hawks, since long before war split her homeland. But the ease and grace that come to her naturally in fighting leathers disappears when battles turn to politics. When a scouting party arrives from far-away Dasnaria, bearing veiled threats and subtle bluffs, Jepp is happy to let her queen puzzle them out while she samples the pleasures of their prince’s bed.

But the cultural norms allow that a Dasnarian woman may be wife or bed-slave, never her own leader—and Jepp’s light use of Prince Kral has sparked a diplomatic crisis. Banished from court, she soon becomes the only envoy to Kral’s strange and dangerous country, with little to rely on but her wits, her knives—and the smolder of anger and attraction that burns between her and him . . .

Email ThisBlogThis!Share to TwitterShare to FacebookShare to Pinterest
Labels: heroines, Jeffe Kennedy, kickass heroines, superheroine, The Edge of the Blade, The Twelve Kingdoms, The Uncharted Realms