Today is the Fifteenth Anniversary of 9-11 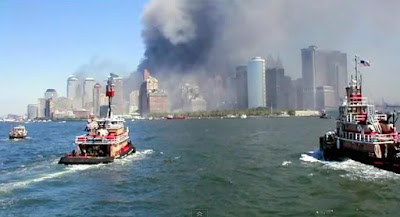 Today marks the 15th anniversary of the disasters of 9-11, which not only shook the world, but changed our way of life forever.

Since that day, American history has been delineated as Before 9-11, and After 9-11. It's also a day that everyone can remember what they were doing and where they were when the twin towers in New York City went down, United Airlines Flight 93 plowed into an Pennsylvania hillside, and the Pentagon was attacked.

For me, it was my first year as a classroom teacher. Prior to the 2001-2002 school year, I had taught elementary music for 25 years. My husband had just survived a heart transplant, and I needed a change of pace. So I accepted a position teaching pre-Kindergarteners. Four-year-olds.

On that day, I was helping them with writing their names, when my classroom door flew open and parents began pouring in, grabbing their children, and leaving. They were panicking and screaming, which upset the children. I stopped one mother and asked what was wrong.

"We're being bombed! We're being attacked!" she screamed at me. "Don't you watch TV?"

My classroom was cleared out within minutes, as were most of the other classrooms at school that day. Confused, I turned on the television, and that's when I discovered what had occurred.

Since that day, every door in every school was locked. Security guidelines were put into place. Our entire way of life was no longer as carefree and open as it used to be.

I wanted to include in this post the names of a few movies that best exemplify and honor those who lost their lives on that day, but there is only one I feel worthy of that recognition. It's a powerful and moving documentary about the hundreds of men who took their boats to the shore where survivors were crowded, looking to escape. Very few people have seen, much less know about this 12 minute film called "Boatlift" when, on that day, over 500,000 people were saved in just a few hours.

Please take the time to view this film linked here.

And please share where you were when 9-11 changed America forever.

* * *
Normally, this is where the author of the blog post would advertise and promote their latest release, or upcoming release. In respect for this day, I will save my news for a later day.