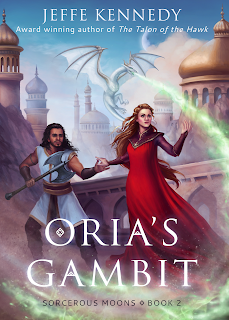 Book Two of my Sorcerous Moons series is ready to go! ORIA'S GAMBIT will be hitting the virtual shelves this week.

The book's been ready, but we've been tweaking the cover. And Louisa Gallie did an amazing job, as always. I'll put up the buy links as they go live.


A Play For Power
Princess Oria has one chance to keep her word and stop her brother’s reign of terror: She must become queen. All she has to do is marry first. And marry Lonen, the barbarian king who defeated her city bare weeks ago, who can never join her in a marriage of minds, who can never even touch her—no matter how badly she wants him to.

A Fragile Bond
To rule is to suffer, but Lonen never thought his marriage would become a torment. Still, he’s a resourceful man. He can play the brute conqueror for Oria’s faceless officials and bide his time with his wife. And as he coaxes secrets from Oria, he may yet change their fate…

An Impossible Demand
With deception layering on deception, Lonen and Oria must claim the throne and brazen out the doubters. Failure means death— for them and their people.

But success might mean an alliance powerful beyond imagining...

In the meanwhile, if you haven't yet picked up a copy of book one, LONEN'S WAR, then this is a good time to do it! 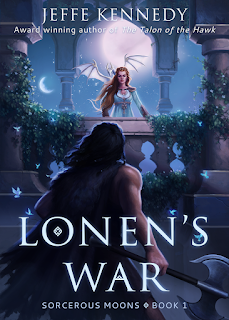