How Online Gaming Influenced My Writing 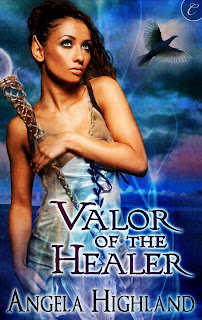 Hi again, Here Be Magic readers! With my fantasy novel Valor of the Healer dropping tomorrow at CarinaPress.com (about which I'd just like to remark YAY! and also HOLY CRAP I have a book coming out!), I'd like to chat with you all about some of the background of the story. And in particular, my online gaming background that influenced aspects of all three of the viewpoint characters.

Out of all the things I've written to date, Valor of the Healer has the longest-running history throughout my life. Way back in middle and high school, I was writing novels that eventually formed the basis of the backstory for Valor's world. And sometimes I was even writing them during class, while pretending to take notes! (One advantage to writing out a story longhand in a spiral-bound notebook!) I still have those stories, and while they are very, very much the products of a young writer, I keep them around nonetheless for nostalgia. In those stories, you can see the very earliest versions of the nation of Adalonia, and the character who eventually became the Anreulag in Valor of the Healer.

Later on, once I'd gotten out of college, I discovered MUSHes. The name is an abbrevation of Multi-User Shared Hallucination, and they are a type of online, text-based roleplaying game. Generally they were based on the setting of a work of SF/F, and the idea was that you'd be able to create a character in that environment and roleplay with other characters in real time. I played on several of these games, including ones set in the worlds of Elfquest, The Dragonriders of Pern, and Star Wars.

The character of Kestar Eyrian Vaarsen is in fact named after a couple of characters played by my friend Amanda, with whom I roleplayed extensively on PernMUSH back in the 90's. The character in my book was originally a lot more like the characters of K'star and E'rian, but he eventually evolved into his own person. Nonetheless, he's named after those characters, in homage to all the awesome roleplay fun I had with Amanda.

But sometimes the settings were entirely original, like AetherMUSH, which was the creation of Astra Poyser Laughlin, who you'll see called out in the Acknowledgements of my book. The reason? AetherMUSH was the place where the first versions of Faanshi and Julian were created.
I found my MUSHing experience surprisingly useful for developing writing skills. On several of the games I played on, if you wanted to play characters with special abilities or "feature" characters--i.e., the game's versions of characters that appeared in the original canon, such as Han Solo on Star Wars MUSH--you were generally required to create an application for those characters. You'd have to think about questions of backstory for the characters, what they may have done before if you were inheriting them from previous players, and what sort of plots you'd want to roleplay with those characters while you had them. It was immensely helpful for character development skills.

And on the best MUSHes I played on, such as Aether, huge emphasis was placed as well upon one's plotting skills. You'd often be called upon to create "tinyplots", interactive plots where your fellow players could join you in carrying out a particular story. Again, valuable writing experience. You'd need to sketch out the broad details of the story, while also accounting for alternate ways for the plot to go depending on the actions of your fellow players.

Eventually, I got to the point where I kept regular running logs of all of my characters' activities. To give readers of the logs more of a sense of continuity, I'd also write "What has gone before" introductions to them, and sometimes side prose snippets as well to link them together. Once I started doing this, people started telling me that reading my logs was just like reading a novel.

Once I committed to writing for real, I had to give up MUSHing--due to not only time constraints, but also due to how the skills I'd come to feel were required to MUSH effectively were ones better spent on my writing work. But to this day, I look back on my MUSHing time with great affection and I still have my archive of roleplay logs. In those logs, you can find the original versions of Faanshi and Julian in particular, characters that never actually interacted with one another in their first incarnations! Bonus fun fact: the AetherMUSH version of Julian had wings!

How about you, Here Be Magic readers? Are any of you gamers of any sort? Fellow Here Be Magic author Tia Nevitt is a fellow former MUSHer, and I'd love to hear about any of the rest of you who have gaming backgrounds, especially if your gaming experiences influenced your writing in any way. What were your favorite games to play? Do you have any characters from your gaming days who are insisting you tell stories about them now? Tell me all about them in the comments!