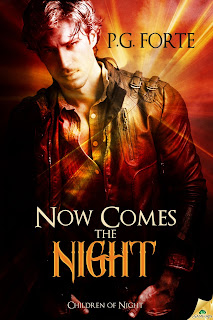 One of the most magical things about writing a series is getting to go back and revisit your characters from time to time, watching them grow and change. That’s certainly the case with today’s new release, Now Comes the Night. This is the third book in my Children of Night series and while writing it I got to travel back in time and view the childhood antics of a couple of my grown-up characters. What makes that especially poignant to me is the timing of this release—because yesterday was my son’s birthday and I can’t help thinking how much fun it would be if I could go back in time and revisit his childhood.

Okay, fine: some of his childhood, because, yes indeed, there are certain parts I’m happy to have seen the end of!

Unfortunately, I can’t do that. I also can’t control his actions or determine his destiny…all ways in which being an author is definitely less stressful than being a parent. See these gray hairs? I did not get them from my characters.

Okay, to be perfectly honest, I didn’t get them from my son either. I got them from my mother’s genes. But that’s completely beside the point!

And now, here’s a quick peek at child raising vampire style! In this scene, Damian has just brought home dinner…
The house was dark as they made their way through the foyer and into the living room, heading straight for the couch—still kissing. Paul wrenched his mouth away from Damian’s only once, just long enough to gasp, “Lights?”
“Not necessary.” Damian pushed the boy back onto the cushions and followed him down.
“Oh, God.” Paul clutched suddenly at Damian, trembling a little, staring wide-eyed at him as if the import of what they were about to do had suddenly dawned on him. “Oh, God, Damian. Don’t stop. Please don’t stop. I want… I want…”
“Easy, Pablito,” Damian crooned, softly biting at Paul’s neck in an attempt to calm the boy’s nerves. “There’s no need to rush. We’ve plenty of time for everything.” He licked at the corner of Paul’s mouth, wanting just one more kiss from him, but even as their lips touched, a flicker of motion caught his eye and made a liar of him. He sighed in resignation. It appeared they had run out of time after all.
Unaware of the frustration they were causing their “uncle”, the twins crept quietly closer with exaggerated stealth—obviously play-acting at being some kind of predators stalking their prey. From the looks of them, and based on the mop head Marc had pinned to the collar of his shirt, he’d guess they were pretending to be lions tonight, the little nuisances.
“Sorry, quequito,” Damian murmured as he brushed a final, brief kiss against Paul’s mouth. He bent his head and swiftly bit the boy’s neck, this time making sure to inject enough venom to knock Paul out completely. “Perhaps later.”
As the boy went limp, Damian sat back on his heels. He could not help but smile as the twins pounced, both of them scrambling up onto the couch and taking one of Paul’s wrists into their chubby hands.
“No more growling,” he cautioned. “And, remember, we do not toy with our food. I want you to show me your best behavior tonight.”
“But I’m a lion,” Marc protested, baring his teeth and roaring loudly. “Grrrr! Lions always toy with their food.”
“Grrr.” Julie giggled as she copied her brother. “I’m a lion too!”
“¡Ya basta!” Damian eyed them sternly. “Stop it now. Playtime is over. It’s time to eat. Unless you’re not hungry? In which case, you are both free to go to your room and leave the adults in peace. But if you get hungry later, you’ll just have to settle for what we have in the refrigerator.”
“No.” Marc protested. “Lions hungry. Wanna eat now.”
“Hungry lions,” Julie said still giggling. “Very hungry lions.”
“Starving lions! Grrrr.”
“Well, this is all most unfortunate,” Damian answered. “And I’m quite sorry to hear of it because, as it happens, I’m only feeding good little boys and girls here tonight. So, what’s it going to be, mis niños? Are the lions willing to be put back in their cages until mealtime is over? Or must I lock up the food, instead, to keep it safe?”
The twins looked at each other. It was Julie who broke first. “No more lions,” she sighed, pouting just a little.
“Only while we eat,” Marc said. “After that I want to play lions again. You too, Uncle Damian.”
Damian smiled. “Bueno. Very good. I’m sure I’ll enjoy that. Now, remember your manners, sí? And be gentle with your food. This is a very nice boy I’ve brought home for you tonight, I don’t want you hurting him.”
“Speaking of manners,” Conrad drawled from the doorway, “You might wish to adjust your clothing before you say anything more on the subject. I don’t believe the state of undress you’re currently exhibiting is considered quite comme il faut these days.”
“Neither is your use of that phrase,” Damian answered, even as he got up off the couch. “If you must know.” He re-buttoned his jeans and quickly pulled his shirt back into some semblance of order, then went to stand beside Conrad in the doorway. “I’m afraid your language is really very sadly out of date. You should probably work on that.”

Home is where the heart bleeds.

Growing up, vampire-born twins Julie and Marc Fischer were taught one simple fact of life: you can choose your food, but not your family. Six months after moving to San Francisco, though, the new challenges and choices each are facing are a Gordian knot of complicated.

Marc must decide whether to stay with Conrad and Damian, the only family he’s ever known, or embrace his destiny and the unexpected family—the ferals—that comes along with it. Meanwhile, Julie is forced to deal with the unpleasant realization that the man she loves isn’t necessarily the man who’s best for her.

For Conrad and Damian, the holiday season is stirring up bittersweet memories, and neither can keep from revisiting past passion and pain.

Faced with new mysteries to solve, new alliances to forge, new secrets to keep, and old relationships to rebuild, it’s no wonder the Fischer-Quintano vampires long for the good old days—when food was food and family was all that mattered.
Product Warnings
If you’ve previously suffered from Disco Fever, this book could precipitate a relapse. Extreme care is recommended for anyone with a pronounced weakness for mistletoe, fang play, pretty young men of either species or extremely dangerous alpha-male vampire single dads. May contain trace amounts of polyester.