The Construction of a Hero

Posted by: Cindy Spencer Pape
One of the most important parts of a romance for me is having a hero I can (at least for a little while) fall in love with. This is true whether I’m reading a book or writing one. There are certain characteristics he just HAS to have, and yet they can’t all be clones of one another. You have to make him strong, sexy, smart, and flawed, but he has to stand out from all the other strong, sexy, smart and flawed heroes out there.

With Liam McCullough, hero of Moonlight and Mechanicals, there were a few things I knew about him from Steam and Sorcery, the first book in the Gaslight Chronicles. He’s got dark hair and eyes. He’s a werewolf, and Irish. He’s a constable, then inspector with Scotland Yard, and his family is something of a mystery. He’s fiercely loyal to his friends. I also knew from the very first chapter of Steam and Sorcery that Wink Hadrian had fallen in love with him at first sight when she was only 16 years old. I knew there was something sad and tragic in his past and that’s about it. A fair amount for a secondary character, but not enough for a hero.

Soon after I started writing Moonlight & Mechanicals, I learned some more things about Liam. He was lonely. He has a powerful belief in justice and using one’s resources to help those less fortunate. He’s utterly estranged from his father, an earl, and had a tragic relationship in his younger days that left him certain he should never marry. He’s also carrying a lot of guilt over his long-standing attraction to Wink.

There’s a crucial moment in this book where Liam learns something about himself and his notions of family and responsibility from someone—actually a series of someones—much younger than himself. It’s mid-way through, so I don’t want to give it away, but I think it’s one of the most entertaining yet life-changing sequences I’ve ever written. Right then, I fell a little more deeply in love with my werewolf cop. I very much hope that you fall in love with him too! 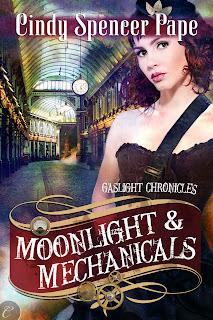 Blurb: Engineer Winifred "Wink" Hadrian has been in love with Inspector Liam McCullough for years, but is beginning to lose hope when he swears to be a lifelong bachelor. Faced with a proposal from a Knight of the Round Table and one of her closest friends, Wink reluctantly agrees to consider him instead.

Because of his dark werewolf past, Liam tries to keep his distance, but can't say no when Wink asks him to help find her friend's missing son. They soon discover that London's poorest are disappearing at an alarming rate, after encounters with mysterious "mechanical" men. Even more alarming is the connection the missing people may have with a conspiracy against the Queen.

Fighting against time--and their escalating feelings for each other--Wink and Liam must work together to find the missing people and save the monarchy before it's too late... 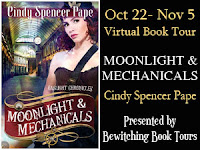 I'll be doing a blog tour over the next two weeks with Bewitching Book Tours. Today I'm also at the Carina Press blog and at Blooding Book Tours. Tomorrow and Thursday, I have live booksignings in Lansing and Flint, Michigan. See my website for more details. I'd love to see you stop by!