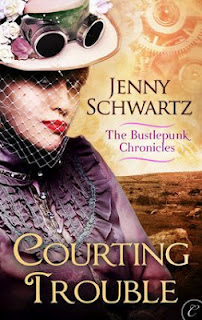 All suffragette Esme Smith wants is respect. Her beau, American inventor Jed Reeve, may be more enlightened than most men, but lately his need to protect her is at odds with her need for independence. Esme begins to wonder if a modern woman can share her life with a man without losing some of herself.

With his courtship of Esme stalled, the last thing Jed needs is the pressure of saving the Prince of Wales. But when blueprints for a sonic destroyer fall into his hands, he uncovers an anarchist plot that could have deadly consequences.

While investigating the threats, Jed is determined to keep Esme out of harm's way, despite her protests. But when the terrorists capture Jed and demand a priceless emerald in exchange for his life, it's Esme who must draw on all her strength to save the day.

It's Banned Books Week. Take a look at the most frequently challenged books of the 21st century.

From TOR.com: As You Wish: Little-Known Facts About The Princess Bride on Its 25th Anniversary.

In the weirdly interesting category: How E-Reader Tech Mimics Octopuses.

Fringe is back! If you missed it, you can watch the season premiere here.

And because I've been watching a lot of Dr. Who lately... Six mysteries that could be solved with time travel.


The authors at Here Be Magic have decided to pull out our bag of treats and celebrate Halloween with a series of month-long giveaways, culminating in a grand prize of a Kindle Fire or Nook Tablet (loaded with ebooks from participating authors) to be awarded to one lucky person on Oct. 31! We'll also announce weekly prizes, including chapter critiques for writers from five of our published authors; promotional services, including promotional tweets, reviews and blog spots; a one-month long mentorship from author Jeffe Kennedy; and a Meet and Greet with authors during the New Jersey Romance Writers Put Your Heart in a Book Conference on Oct. 13. We'll post more details tomorrow. Be sure to stop back by then to enter.