For Love of a Wounded Man

Far From Broken, the first book of my Seasons of Invention series focused on Jasper and Callie, who were trying to find their way back to each other after a terrible event changed their lives forever. Callie had lost both of her legs, a hand, and an eye, and she’d been dealing with a lot of anger about it, while her husband had guilt up to his eyeballs and fear that he was going to lose the only thing that mattered to him even if, technically, she was going to live. There was a lot for them to wade through before they could even think about being happy again, and at the end of the book I felt glad for them that they would make it, but I wanted to show readers that it still wasn’t going to be an easy road.

That’s why I really enjoyed writing book 2, Broken Promises. I was able to go deeper into the lives of these two people, explore their healing process, and the extent of their love for each other in more depth.

But in book 2 we also meet Captain Jamie Dunsmoor, who has also been wounded in the line of duty, also been transformed by the War Office’s advanced medical, and isn’t happy about it. It’s cost him everything. His family. His career. His freedom.

Now I’m starting to plot for Dunsmoor’s book, and while I don’t necessarily want to have to become immersed in another character’s pain again, I know his story is going to have some darkness. I still haven’t found the right heroine to balance that, the one to bring him back into the light. But I’m working on it. I think she’s going to have to have a lot of spunk, and a lot of strength.

How much darkness do you want in the books you read? Do you want the nitty-gritty moments to be thick and black like oil and pull no punches, or do you read to get away from all that?

J.K. Coi is a multi-published, award winning author of contemporary and paranormal romance and urban fantasy. She makes her home in Ontario, Canada, with her husband and son and a feisty black cat who is the uncontested head of the household. While she spends her days immersed in the litigious world of insurance law, she is very happy to spend her nights writing dark and sexy characters who leap off the page and into readers’ hearts. 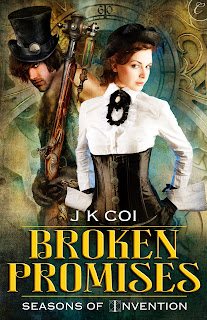 Former ballerina Callie Carlisle is determined to rebuild her life with her new mechanical limbs. She's just learned to accept the enhancements that saved her from certain death when she experiences uncontrollable twinges and flashes of light that obscure her vision. Terrified of literally falling apart, she resists telling her husband. Jasper's already vowed to keep her out of harm, and she doesn't want to worry him further.

When the War Office's General Black arrives with an urgent mission—rescue the doctor who created Callie's enhancements—she has no choice but to accept. A rogue agent and former patient of the scientist believes the biomechanical modifications he received are killing him, and he's out for revenge.

Callie must reach the doctor before it's too late. But with an overprotective Jasper at her side, and her alarming symptoms getting more frequent, will she be able to hold herself together long enough to save the doctor...and herself?

J.K. Coi
Author of contemporary and paranormal romance, steampunk and horror. I love to showcase other authors and their books so give me a shout if you'd like a little screen time at jkcoi(AT)rogers(DOT)com