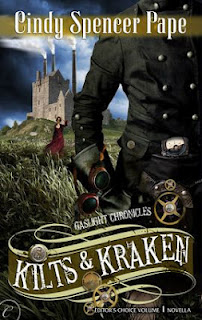 Magnus, Baron Findlay, longs to bring the wonders of the steam age to his remote island home, but his hands are full fighting the vicious kraken ravaging the coast. When he's swept to sea during battle and washes up on the shore of an isle in the Hebrides, he is near death.

Struggling to establish herself as one of the first female physicians in Edinburgh, Dr. Geneva MacKay is annoyed when The Order of the Round Table sends her north to care for an injured highlander. To heal him, Geneva escorts the handsome warrior home, just in time to defend the villagers from another onslaught.

As the attacks escalate and they work together to fight off the threat, neither Geneva nor Magnus can resist the overwhelming attraction between them. But as their relationship deepens, a new threat arises--from within the village itself... 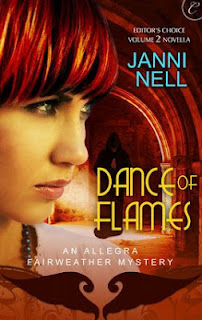 Family vacations fill me with horror--and for a woman who makes her living as a paranormal investigator, that's saying a lot. Still, I couldn't turn down a month in sunny Spain and the chance of flamenco lessons with Casper, my gorgeous guardian angel--even if it did mean sharing a villa with my mother.

But it's true what they say, there's no rest for the wicked. We'd barely unpacked when the maid started having dreams of being tortured on the rack--dreams my intuition tells me are something more than your average terrifying nightmare. After all, we are in the land of the infamous inquisition, and she does have those unexplained marks...

So for now my dance partner's going to have to wait for me to get to the bottom of this mystery, and when I do, I plan to send evil packing.

What are your self-destructive reading habits?: This part is me> "I'm not the type of person who should be reading scary stories. I say this not because they scare me, but because they don't . . . immediately. Instead, they nest in my head until the appropriate time."

Together for the First Time: "All five of the Star Trek captains appeared together for the first time this weekend at Wizard World Philadelphia Comic Con."

In case you missed it: Carina Press Spring 2012 call for submissions!

Interesting op piece in the NY Times: Death, Sex and Vampires. "Dread of death, not love of sex, is why the dead keep rising."

Julia Knight's The Pirate's Lady, sequel to Ten Ruby Trick, is available for pre-order at .99 for a limited time. Ten Ruby Trick is a great book (Pirates! Magic! Adventure!) so if you haven't read it yet, you should get that one too.