When a Favorite Character…Isn’t a Character 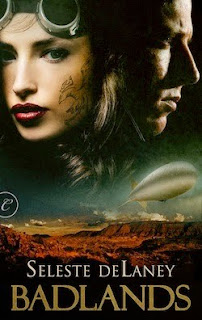 One of my favorite things about steampunk is that it embraces characters outside of humans. I can hear it now, Seleste, lots of genres do that. Paranormal has supernatural creatures, sci-fi has robots and aliens and sentient planets. All of that is true, but except for rare exceptions (two of which I’ll mention below), the characters in those genres still rely on being thinking creatures, and more than that, thinking in ways that tend very much toward human (if sometimes mentally unstable human).

Steampunk though goes a step further. When I asked my readers who, other than my hero (Spencer) and heroine (Ever) they’d like to see on a set of Badlands trading cards, their answers weren’t Henrietta or Zeke or even Senator Mason. I got a unanimous vote for Spencer’s ship, Dark Hawk. The second most popular request went to the clockwork birds.

Granted, most of Badlands takes place aboard Dark Hawk, but to request it on a trading card means the ship went beyond a setting for many readers. For them, the dirigible became a character all it’s own. It’s like the Millenium Falcon or the Winchester boys’ Impala. It’s not only where the action happens, it’s also the thing that pushes the characters together. The Dark Hawk is the glue that holds the story together—without it there’s no reason beyond being a good guy, for Spencer to help Ever. Without it, the story falls apart. Quite honestly, I can’t imagine a Badlands story without that ship as an integral part. I think that’s part of what makes the Dark Hawk so important to readers as well. Human characters can die, and do, but something about that poor trading dirigible makes it eternal. I probably would risk less angry fan mail by killing any of my human characters than I would if I destroyed the Dark Hawk.

I love the idea of something being so important to my readers. And that goes for the clockworks too. While the Dark Hawk represents a constant in the world of the the Badlands, the clockworks are transitory. One is an old model of aircraft that refuses to die, the other is…expendable. The clockworks in my world are only around so long as they’re useful. Once they’ve been used up or worn out, their makers destroy them or set them free. They are a metaphor for death and the passage of time, just as the Dark Hawk symbolizes immortality.

How many places do people embrace both the darkness and the light within a story, especially when neither of those things is even remotely human?