Posted by: Amanda
Monday, March 28th is the release day for Hunting Human, my debut novel from Carina Press.  Needless to say, I’m beyond excited. 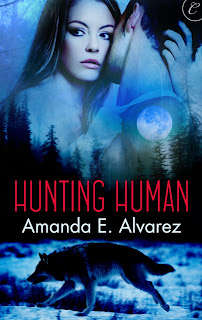 For two years, Beth Williams has run from the past, and the beast that dwells inside her.  She is haunted by memories of being kidnapped and the savage attack that killed her best friend.  Now Beth finally thinks she’s ready to move on… with Braden Edwards, a charming, irresistibly sexy man who tempts Beth to embrace the present.
But the past lurks closer than Beth realizes.  Markko Bolvek, one of the werewolves who kidnapped her, has tracked her to Portland, Oregon, his pursuit fueled by a hunger for vengeance.  Only Braden, a werewolf himself, senses the danger shadowing her steps.  The Edwards and Bolveks have been enemies for centuries and despite the instant connection he feels with Beth, Braden isn’t sure which side of the war she’s on.
With suspicion at odds with their attraction, Beth and Braden must learn to trust one another to stop Markko for good.  Can Beth accept the wolf within and love a man who embodies everything she fears?
In the run up to release day, I’ve been asked a lot of questions about my writing process and about the book in general.  But there has been one question I’ve been asked over and over again, and I’m only beginning to understand the answer myself.  Why write about werewolves?  What’s the attraction?
I confess that prior to writing Hunting Human I’d read my fair share of paranormal romance books, everything from shifters to vampires to demons.  It’s always been a genre I’ve particularly enjoyed.  But the truth is when I started out with the idea for Hunting Human I didn’t initially realize that I planned to write a werewolf book.  Hunting Human for me was always Beth’s story.  It began with a single scene of her running through the woods, I didn’t know what she was running from or how she got there but I did know that something terrible would happen if she were caught.  In truth, it took a long time before I knew for certain that werewolves were heavily entwined with Beth’s story.
When I finally came to the realization that yes, I was writing a shifter book I felt a little lost.  I hadn’t ever given a lot of thought to werewolf mythology.  I certainly didn’t have my own.  Where to start?  What to do?  There was a lot of hyperventilating and cursing at my laptop, I felt as though my entire direction had been derailed.  What to do, I wondered?  Which led me to what would Beth do?  What would Beth, a woman with no knowledge of the paranormal do when turned by a werewolf in the most savage way possible?  How would someone cope, with no support system, no family to believe her, no resources?  How would she muddle through?  Would she Google information?  The more I thought about it, the more I realized what an incredibly hopeless and isolating situation that would be.  And I found my story.
Hunting Human is about a young woman forcibly turned, left in the world alone to deal with an affliction that’s both painful and isolating.  Beth’s journey isn’t easy.  It’s dark, painful and at times overwhelming.  She struggles against those who would hurt her and those who would help her. Most of all she struggles against herself.  She is literally at war with the darkest part of herself.  A part she can’t control and doesn’t understand.  Worst of all, it’s a part she holds responsible for her best friend’s death.  And at the end of the day, it’s the part of her that has the power to win the day or seal her fate.
So yes, I wrote a novel about werewolves.  But I hope that more than that I wrote a book about Beth, an imperfect hero who stumbles two steps back for every step forward she manages to take.  I hope I wrote about humanity and how the darkest parts of us, the parts we loathe are sometimes the places our deepest strengths come from.
Hunting Human can be purchased from Carina Press, Amazon, and other online retailers.
Find me on Facebook and Twitter.
On the web at: http://www.amandaealvarez.com/