Posted by: Cindy Spencer Pape
They're not quite steampunk. They're not quite fantasy. They're mostly romance. According to the first reviews, they're a LOAD of fun. Actually, Reading the Paranormal said, "This book was a load of fun.  A LOAD.  The blending of steampunk, knights, magick, vampyres and other supernatural critters just flat out worked."  The complete review is here.

One of my favorite scenes in any romance is that first kiss, so, here's a teaser for Steam & Sorcery, book 1 of the Gaslight Chronicles, out this week from Carina Press. 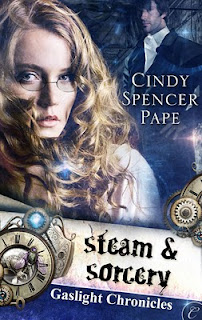 Sir Merrick Hadrian hunts monsters, both human and supernatural. A Knight of the Order of the Round Table, his use of magick and the technologies of steam power have made him both respected and feared. But his considerable skills are useless in the face of his greatest challenge, guardianship of five unusual children. At a loss, Merrick enlists the aid of a governess.

Miss Caroline Bristol is reluctant to work for a bachelor but she needs a position, and these former street children touch her heart. While she tends to break any mechanical device she touches, it never occurs to her that she might be something more than human. All she knows is that Merrick is the most dangerously attractive man she’s ever met—and out of reach for a mere governess.

When conspiracy threatens to blur the distinction between humans and monsters, Caroline and Merrick must join forces, and the fate of humanity hinges upon their combined skills of steam and sorcery…

He reached out and cradled her face in his free hand. “Caro—” Even he didn’t know what he’d been about to say. He couldn’t fight the urge to see if she tasted as good as she looked. Moving slowly, giving her plenty of time to push him away, he leaned forward and lowered his lips to hers.

The barest brush of skin against skin burned like an electrical shock. This wasn’t faery magick or a Knight’s power, but the raw, elemental earth magick of male and female. He kissed her again, this time with enough pressure to actually call it a kiss. It still wasn’t enough. Far from rebuffing him, Caro clutched his head with her good hand, her fingers spearing through his hair to hold him closer.

Merrick jumped back from Caro and she recoiled back against the headboard, her face flaming a vibrant pink. They both turned guilty faces toward the bedroom door.

To see more of Merrick and Caroline’s adventures, I’d love for you to stop by the Carina Press website and check out Steam & Sorcery. To celebrate the new release, I’m running a contest. Comment on any (or all) of the blogs I visit on my blog tour this week. One entry per person, per blog stop. You can visit my blog to find the other stops. After the final stops on Sunday, March 13, I’ll draw one winner for a free download of Steam & Sorcery, or their choice of my other available titles. Happy Reading!